In the Blue Guide to Rome, I read that there are 13 Egyptian obelisks here, more than anywhere else in the world, including Egypt. Many of these arrived during the period when Rome ruled Egypt and various emperors seemed to think that rowing a multi-ton monument across the Mediterranean was a good project. I decided to visit all the obelisks in Rome and I managed to see the last one today, on our second to last day in the city.

Taking photos of Egyptian obelisks is a crazy quest, because they all look alike! Many of them have similar ornaments on top, often a Christian cross, and several of the obelisks don’t have any hieroglyphs carved on them at all. At least one obelisk has hieroglyphs that were carved on the sides IN ROME. I guess that was to make sure it said just what the emperor wanted…..

Inscribed by Set I and Ramses II (13th-12th c. BC) Borugh to Rome by Augustus fro Heliopolis, moved to Piazza del Popolo in 1589.

This obelisk was added to the fountain (1575) in 1711. It is inscribed to Ramses II (the Great). The photo was taken during the March for Science. This obelisk was formerly in the Temple of Isis in Rome. 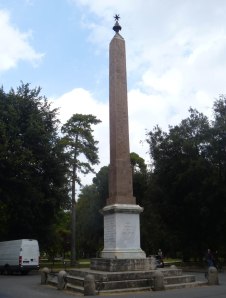 Placed in Piazza Bucharest (Viale del Obelisco) in the Pincio park in 1822. Found in 16th c. outside Porta Maggiore,may have decorated Circus Varianus. Hieroglyphs suggest it was originally erected by Hadrian on the tomb of his lover Antinous, who drowned in the Nile in AD 130. Transported from Egypt by Heliogabalus in the 3rd c. AD. 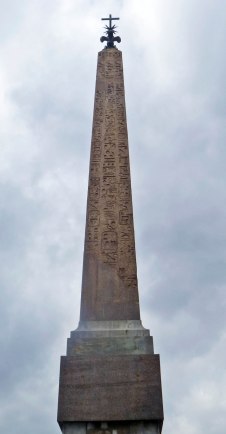 In Piazza Trinita dei Monti at the top of the Spanish Steps, this obelisk was probably brought to Rome in 2nd or 3rd c. AD. Stood in the Gardens of Sallust. It was moved to present location in 1788 by Pope Pius VI.

This is the obelisk in St. Peter’s Square at the Vatican. It was brought ot Rome by Augustus in 37 AD. Caligula placed it in his circus, later the Circus of Nero. In 1586 Pope Sixtus V had the obelisk moved to the center of the new St. Peter’s square. 900 men, 150 horses and 47 cranes were used in the move. 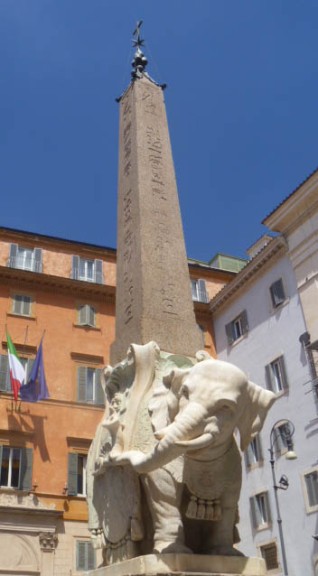 In Piazza Minerva this small obelisk sits on the back of an elephant, a combination created by Bernini in 1667. The obelisk was originally part of the nearby temple of Isis. The hieroglyphs relate to Apries, the last independent pharaoh of Egypt.

This obelisk was brought to Rome by Domitian (emperor 81-91 AD). He had hieroglyphs carved on it in praise of himself his father and brother. It eventually lay abandoned in 5 pieces in the Circus of Maxentius on the Appian Way. Pope Innocent X wanted it to top a massive fountain in Piazza Navona, as it now stands. There is a good story about how Bernini gained the commission to create the “Fountain of the Four Rivers” that forms the base of the obelisk (1648). 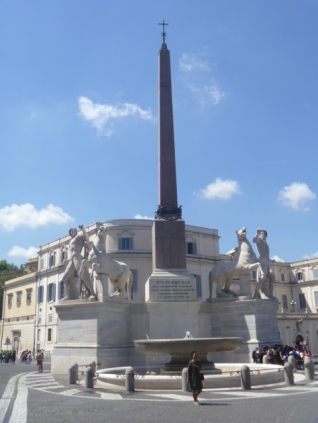 The Quirinal obelisk originally stood in front of the mausoleum of Augustus. Brought ot Piazza del Quirinale in 1786 by Pope Vius VI, who added a large basin (it had been a cattle trough). Two colossal statues flank this obelisk. Now called Castor and Pollux they are copies of Greek works of the 5th c. BC and were set here in 1585-90, even before the obelisk.

Called the Lateran obelisk, this is the oldest in Rome. Originally erected by Thutmose IV at the Temple of Amun at Karnak in the 15th c. BC. Constantine had the obelisk moved as far as Alexandria where he abandoned it. His son, Constantius II brought to Rome from Alexandria in 357 to decorate the Circus Maximus. It was found there in 3 pieces in 1587. At 31 m high it is the tallest obelisk in existence

The obelisk in Piazza Montecitorio was first put up in Heliopolis, Egypt by pharaoh Psamtik II (c. 500 BC). Augustus brought it to Rome to celebrate his victory over Cleopatra and set it up in the Campus Martius, where it served as the gnomon of an immense sundial. In 1748 it was discovere buried in an open space near the Palazzo dei Montecitorio and was erected in its present site in 1792. Today the Palazzo de Montecitorio is the seat of the Italian parliament. 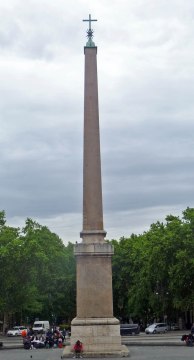 The Esquiline obelisk formed a pair with the obelisk now in the Piazza del Quirinale. Together they stood outside the Mausoleum of Augustus. It was found there in 1519 in four pieces and was set up in front of the basilica of Sta. Maria Maggiore in 1587.

The Dogali monument includes an obelisk, in the Piazza della Repubblica, just outside the Baths of Diocletian, placed in 1887 as part of a war monument. The obelisk itself was found in 1884, though. it was originally part of the temple of Isis in Rome and has a companion in Florence. The hieroglyphs carved on this obelisk were inscribed in honor of Ramses the Great or Seti I around 1300 BC. 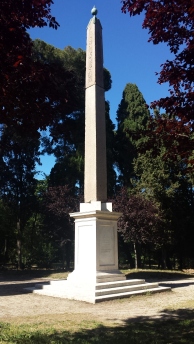 The obelisk at the Villa Celimontana is believed to have originally been set at the Temple of Isis in Rome. It formed a pair with the obelisk in Piazza Rotonda in front of the Pantheon. It is now a bit isolated, but in a very peaceful park setting compared to the traffic circles and busy piazzas where most of the others are located.

Close-up of the hieroglyphs on the obelisk at the Villa Celimontana.

Obelisks have always been symbols of wealth and power. What purpose is served by carving a gigantic rock and covering it with symbols? Obelisks were first created as monuments in Egypt, then recognized as symbols of power by the Romans, who carried them off to Rome, where they stood for hundreds of years. After the fall of the Roman empire, there is little information about these obelisks until the 1500s, when they were resurrected, literally, from burial places all around Rome and set in new places, mostly under the direction of a series of Popes, who were very focused on gaining and keeping political power at the time. Most have not been moved since the 1700s, though the Dogali obelisk was not rediscovered until 1884.

To see my comments about the obelisks, please click on the individual photos.