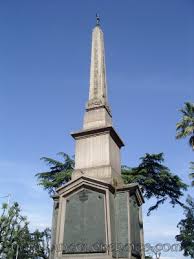 The Dogali monument includes an obelisk, in the Piazza della Repubblica, just outside the Baths of Diocletian, placed in 1887 as part of a war monument. The obelisk itself was found in 1884, though. it was originally part of the temple of Isis in Rome and has a companion in Florence. The hieroglyphs carved on this obelisk were inscribed in honor of Ramses the Great or Seti I around 1300 BC.