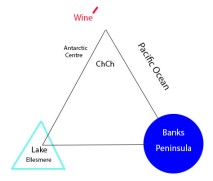 My mental map of Christchurch is a triangle. The city center is near the top. The lower right corner is the Banks Peninsula, an ancient volcano that on the map looks like a huge pinwheel. The lower left corner is Lake Ellesmere, a very large, shallow lagoon that is barely connected to the sea through a gap in the dunes. The Pacific Ocean borders two sides of the triangle with one side (left) firmly part of the mainland.

My favorite place in central Christchurch was the Canterbury Museum. It has skeletons of extinct moas, and lots of maori artifacts. The museum is located on the corner of the Botanical Gardens, too, making it possible to visit to both places in one day. 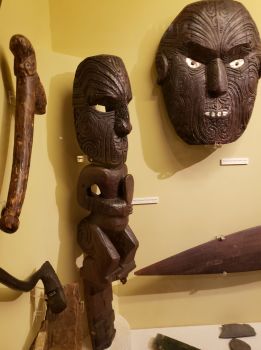 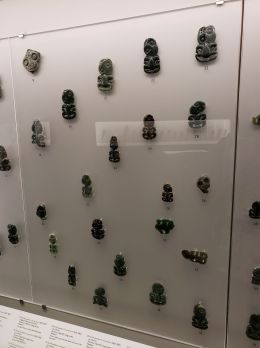 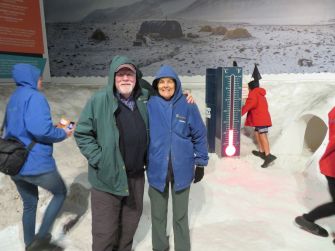 Just outside the city center, right at the airport, is the International Antarctic Centre. I wasn’t sure it would be worth the price of admission, yet we had a great time and were there for at least two hours. There are excellent exhibits on what its like to spend a research season in Antarctica, the clothing, the housing, even an Arctic storm room that simulates a whiteout. The snow and ice covered room not really as cold as the Antarctic, but it’s very cold. You wear an extra expedition jacket over what you are already wearing, and boot covers. 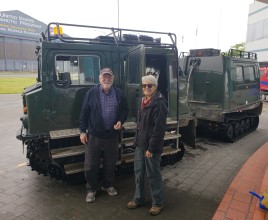 Later, we went for a ride in the tank-like vehicles they drive on the snow in Antarctica, including demonstrations of going up and down steep hills and leaning way over to one side. There are penguins, too, blue penguins swimming in a pool with an underwater window. It was a great visit, and I really liked seeing the US National Science Foundation Antarctic Center right across the street, even if there wasn’t an exhibit there. Christchurch is the departure point for all US researchers going to the US Antarctic base at McMurdo Sound, including some of my colleagues from Northern Illinois University. What an adventure that must be!

Out on the Banks Peninsula, Akaroa is a small town known for its brief reign as the French outpost in New Zealand. From Christchurch the drive is at least an hour and a half across two old volcanoes. You see the edge of the crater as you go over the hills to Little River, then across the crater to Akaroa. The town offers beaches, lunch, and shopping, an excellent vacation stop. We were there on a day with a cruise ship visit (!), which has the benefit that all the stores and restaurants are open, but the disadvantage that they are all full. We left town to look for a place to have a picnic, and ended up in a cove across from the moored cruise ship, watching tenders carry passengers back and forth, while people paddleboarded, jet skied, and kayaked around the bay. The water is cloudy in other parts of New Zealand from glacial dust and runoff that gives it a bright turquoise color. Akaroa is nowhere near the glaciers but the water has the same slightly cloudy bright blue color. 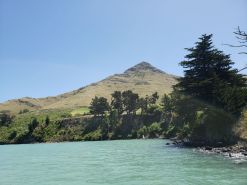 We explored the north edge of the Banks Peninsula in a separate trip around Governors Bay where the only person we met was a young woman at a family reunion nearby. She told us the name of this mountain in Maori.

Our visits to the third corner, Lake Ellesmere began coincidentally when we turned off the highway to look at shore birds. We ended up at Birdling’s Flat, a long pebbly stretch of beach. On our way out we stopped at a quirky rock shop and museum and found that many of the pebbles at Birdling’s Flat are agates. Once polished, there are all colors, and the shop/museum displayed thousands of polished stones. 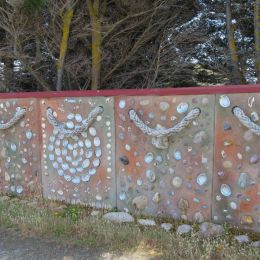 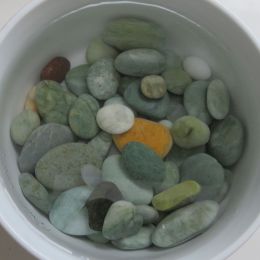 On our final trip to Lake Ellesmere to look at birds, we ended up laughing and taking a selfie while slogging around in a muddy tidal flat. The promised birds…..they were all black swans, hundreds of them. (We’d already seen hundreds of black swans.) 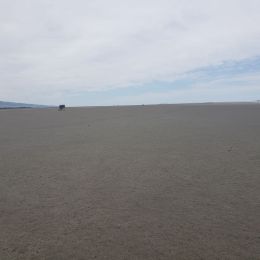 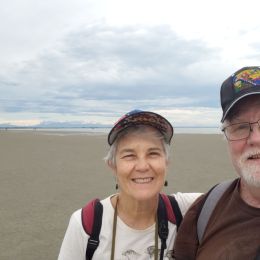 The weather has been unusually rainy and cool, we hear, though since we didn’t know any better, we went out almost every day to visit a beach, or a winery. 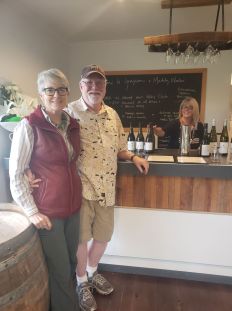 You could spend a lot of time touring the Marlborough wine region north of Christchurch, but we decided to leave that for another time. We had delicious wine at the wineries we did visit. In New Zealand, a tasting room is a “cellar door.”

2 thoughts on “Visiting Christchurch and the Banks Peninsula”