This week was the best weather since we’ve been in northern California. 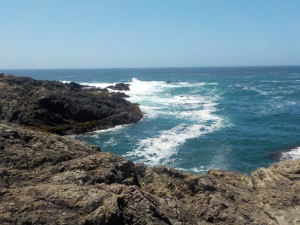 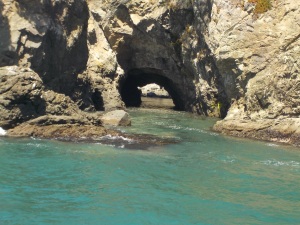 We discovered that you need a guidebook to find some of the access points to the coastal trails, because they are so well hidden. Homeowners are not necessarily trying to prevent public access to the coast, but the rights-of-way are very specific. You can miss a trail if you don’t look carefully.

A lagoon sits a few hundred feet from the ocean.

The beach is gravelly but beautiful, with no other visitors.

Either the trail needs maintenance, or it has a shady mystique.

This week we moved from our apartment in Ft. Bragg back to Mendocino. Before we left, I took a walk around Ft. Bragg. Our apartment is in the downtown area, bordered by the coast on one side and extending east. From downtown you pass a block or two of transitional neighborhood and then you are in the zone of permanent residents. You can tell from the houses, most I’d call California bungalows. Many are well kept or in the process of being fixed up.

There’s something unusual about the soil in Ft. Bragg, too. I’ve never seen such bright blue hydrangeas outside a florist’s shop. 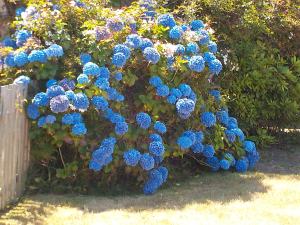 We moved out on July 31, and had a few hours before we could check in to our motel, so we went berry picking. It included the happy discovery of two apple trees covered with ripe fruit in the middle of the berry patch.

We picked enough wild blackberries to make about 3 cups of seedless jam and 2 cups of blackberry sauce for ice cream. The apples were enough for an apple crisp.

Once again we stayed at a California motel that doesn’t use water-saving shower heads. Thanks Surf and Sand, Ft. Bragg. Let’s just hope you use gray water on your landscaping.