We chose a peculiar area for this trip, based on our archaeology backgrounds. We wanted to visit the sites we’d heard of for so long. Neither of us looked at the region on GoogleEarth, for example, where it appears as a gray patch on the otherwise bright green surface of Ecuador. At this time of year, the Santa Elena peninsula is very dry and tends to be overcast, which we discovered when we drove north to visit the Valdivia museum and the sun was out. On the days we’ve driven north, the sun has appeared as soon as we get about 10 miles up the road. 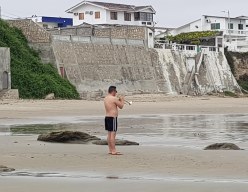 We discovered the charms of the region right away. We walked down the beach in front of our house and found a man playing a romantic Latin tune on the trumpet while the rest of his family swam and played on the beach.

On another day, we drove to the part of Ecuador that juts furthest into the Pacific Ocean, 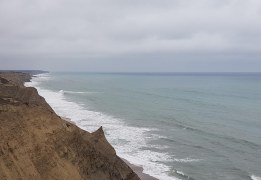 Salinas point. It was Saturday and there were lots of visitors. The ocean extended as far as anyone could see. 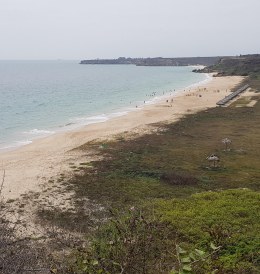 We had wonderful beach combing in many places. Playa Rosada is a place that many people recommend. I didn’t find the sand particularly pink, but perhaps the sun needs to be out. One of my favorite beaches is the stretch north of Valdivia and San Pablo and south of Montanita. We found a couple of very old pieces of beach glass, one colored lavender from the sun (these mostly date prior to 1915), the neck of a glass jug and the base of an old spirits bottle.

On the way home, we stopped for a look at the “Antiquities” store and saw old radios, fishing tackle, chandeliers, even electric typewriters, though I doubt they still work. 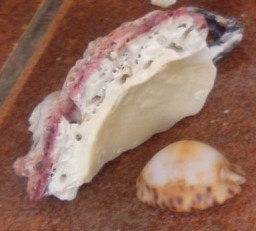 On our last day of beach combing, I found a piece of spondylus shell. It’s not much to look at, a piece from the center of a spondylus calcifer, but it’s the only fragment we’ve seen. A little research shows that there are spondylus species in all the world’s temperate oceans, so the shell that ends up in jewelry in Peru, where it is very popular with tourists (it was used by the Inca), probably is all imported from Asia. There certainly isn’t much left in Ecuador. 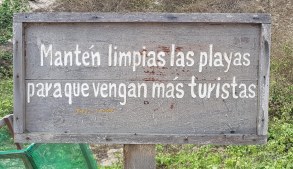 We visited beaches that host nesting turtles earlier in the year. There are even covers that are used to mark turtle nests, though wouldn’t it be better leave them anonymous? We also saw this sign, that I don’t think sends the correct message. It says: KEEP THE BEACHES CLEAN SO THAT MORE TOURISTS COME. 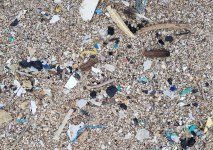 I’d rather have the beach kept clean because that’s good for everyone. When we walked on the beach we were reminded of the present state of the oceans. No matter where you are, there is lots of plastic on the shore. If you visit a clean beach, it’s because someone cleaned it before you arrived. There is no escaping ocean plastic, even on gorgeous beaches where it’s not immediately visible.