Romantically named, the Ruta del Spondylus highway borders the the ocean in places, then dips inland around high hills, making its way from northern Peru to northern Ecuador.

It is named after the spondylus shell, brilliant orange or deep purple species that were used to make beads and jewelry by the ancient people of both Ecuador and Peru. These mollusks are only found in warmer waters–no spondylus were harvested in the waters off Peru, but the bright colored shell was traded south from Ecuador into Peru by 3000 BC, or perhaps even earlier.

Over-harvesting resulted in a crash of spondylus and today it is in danger of extinction. The Ecuadorian government is supporting experiments in repopulating these species. We found no trace of spondylus in the many tourist souvenir stands along the roadway, though we found a local monument to these lovely shells.

Jewelry made from spondylus shells is very popular among tourists visiting Peru, though the shell comes from all over the world. The romance of having something made from shell that was valuable to the Inca and their even earlier ancestors still captivates visitors.

In Ecuador, however, the greatest enchantment is in the beaches that line the route. There are well-known stops such as Playa Los Frailes or Playa Rosada (pinkish sand), and lesser known beaches that lack umbrellas and chairs for rent, but provide long stretches for a walk or a swim. We are visiting during the off season, the dark of winter to many Ecuadoreans because of the cloudy weather. It has not rained, but the sun has been out only two days of our first seven here. The Santa Elena peninsula, where we are located, is one of the driest places on the Ecuadorian coast. In GoogleEarth, it shows up as a grayish brown finger of land pointing out into the Pacific. 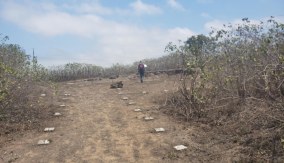 Part of the attraction to us is the deep history of the area. Ecuador was home to very early villages that formed by 3800 BC in places like Real Alto. We visited the museum at that site on one of our first days in the area and walked around. It’s a difficult sell for tourism, however, because there is nothing to see on the surface. The raised area where people built their houses is barely distinguishable from the surroundings, and even when the

excavations were first being carried out, the astonishingly early remains consisted of the stones that formed the base of clusters of houses. There was never anything on the surface. You need a good imagination to  build a circle of oval thatched houses in the brush that covers the area today. We enjoyed chatting with the young woman excavating some test units as part of a thesis project at ESPOL (Escuela Superior Politecnica del Litoral).

Our next archaeology stop was the Museo des Amantes de Sumpa, just down the street from our house, in the town of Santa Elena. We wanted to see the famous skeletons of a young couple buried together in an embrace. What we found was an excellent local museum with information on the ancient people of the region that was never boring or preachy (as a lot of museum text seems to be). In addition to the archaeological exhibits there was a recreation of a local house from a century ago that showed the very simple possessions people are likely to have had.

Having heard a lot about hat-making in Ecuador (home of “real” Panama hats), we were interested to see that the equipment for making straw hats is unchanged between today and the 19th century. It was a lovely visit–I only wished they had a gift shop! We were impressed by the entire museum, which is carefully tended. The exhibits are not complex or high tech, yet they are absorbing. The meeting room of the museum was in use during our visit with a training program (according to the guard). It is nice to see the public spaces of a museum in use.

Our next stop was the museum at Valdivia, site of the oldest pottery in the New World when it was originally reported in the 1970s. Jonathan and I studied archaeology when this site was the next big thing, and Betty and Clifford Meggers and their Ecuadorean colleague Emilio Estrada, proposed that Validivia showed a connection between Japan’s ancient Jomon culture and the earliest ceramic-makers, as early as 4000 BC.

Today this seems like an unlikely proposal. The similarities between Jomon and Valdivia pottery are related to the fact that there are only so many ways you can decorate pottery that is made and decorated by hand with no tool more complex than a pointed stick.

The Valdivia Museum is run by the community and has almost no budget. There are volunteer docents who were pleasant and knowledgeable, but there was almost no labeling and many of their photographs had disappeared or disintegrated. We enjoyed our visit. I was astonished to hear that the museum is built right on the middle of the excavated site.

The town has grown up on and around it, covering up the site entirely. We stared at a low dirt embankment in the parking lot as though potsherds would be lying there waiting for us. Since none appeared, we asked whether anyone sold replicas of ancient pottery and were referred to a house around the corner, the home and studio of Juan Orrala, master replica-maker. We chatted and looked at his work, all the copies stamped with “Replica-Juan Orrala” in the clay of the base. His contemporary work inspired by ancient designs is beautifully made, so we took home some of each. What you see below is the replica figurine we purchased (8 in long), a whalebone figurine in the museum (about 24 in long) and a monument outside the town of Valdivia (about 6 ft. high). The museum holds hundreds of fragments of smaller clay versions of the “goddess.”

We also bought a matching plate and bowl set that we are already using as serving ware. 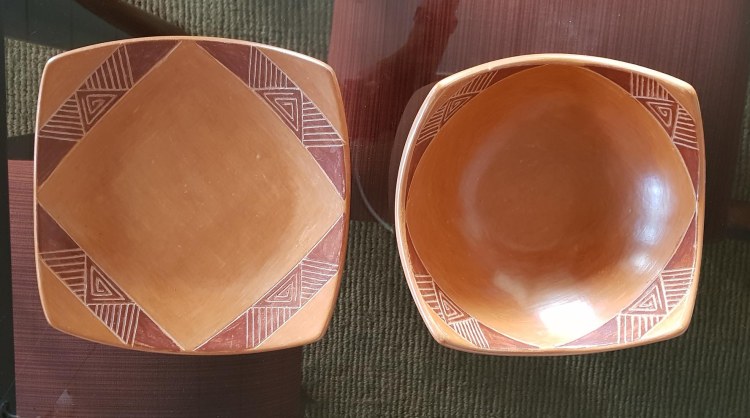 We are happy to have met the talented Sr. Orrala.