We enjoyed Darwin very much, and were there for a very short time by our standards (10 days).

Airbnb: Our place was excellent, with a large roofed outdoor patio and a small pool. We used both often.

Air Conditioning: Is a must for Darwin, at least in the bedroom. The temperature is normally over 90°F. during the day and doesn’t cool too much overnight.

Do you get swollen feet?: The heat and equally high humidity has a big impact on travel. Between 10 am and 6 pm your clothes start sticking to you after a minute or so outdoors. You may not want to walk very far. If you visit a national park to hike, you need to consider how hot it is likely to be when you arrive, and how long a hike you intend to take. We tried to do most of our walking 6-10 am, and it worked very well, even though we are not morning people. If your ankles/feet swell in hot weather, or you develop heat rash easily, this may not be the place for you. The tropical setting is lovely and there are lots of birds, but it won’t be fun if the heat and humidity make you miserable. We would have stayed longer despite the conditions.

Hazards: During “The Wet,” between November and May, crocodiles spread from estuaries across coastal waterways and into the ocean. The difference between fresh water and salt water crocodiles? The freshies just bite you, while the salties drown you and then eat you. Ready to go swimming? Neither am I. There are a few beaches with nets that make it possible to swim. The nets also keep out box jellyfish, or stingers, that are around during the same season. By June, both menaces retreat and it is safe to swim in most places. It’s never absolutely safe to walk the remote beaches. 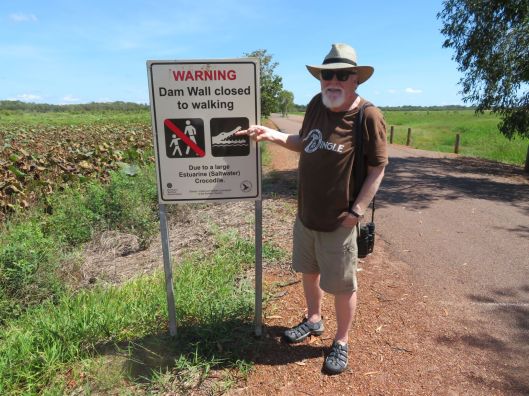 It doesn’t ever get very cool in Darwin, you have to seize the day and then duck into the shade, so that’s what we did and our ten days flew by. The park adjoining our deck continued to yield new birds, from tiny crimson finches to orange legged scrubfowl, a brown chicken-sized bird with long stilt legs the color of traffic cones. Nightcliff Beach gave us beach glass for more projects. Further along was the Casuarina Reserve, another lovely walk on the shore. One day we decided to take the road to the north until it ended, which is how we visited the Gunn Point campsite and the Tree Point Conservation Area. These places may not be on the top ten list, yet we saw something new at every one. We ended with an evening at the Foreshore Cafe watching the sun set over the ocean.

In Darwin city, we visited the Museum and Art Gallery of the Northern Territories (MAGNT). We looked at the Australian art and Aboriginal art, the stuffed animals, and a display about the sky and art that blended everything from meteorites to contemporary painting.

Not far from the museum, the Saturday Parap Market has lots of food stalls, craft shops, flowers, and even some fruit and veg.

Art galleries nearby feature Aboriginal artwork. The best known market in Darwin is the Mindil Beach market. To avoid the drenching downpours of “The Wet,” the market runs from the last Saturday in April through October. We arrived a week too early, but Parap operates all year long and had a little bit of many things. Downtown Darwin is not the most popular part of the region, but we went on an aboriginal art crawl, visiting five different galleries and seeing a lot of artwork. There are so many pieces, and prices are high. We wondered how they will manage to sell it all. 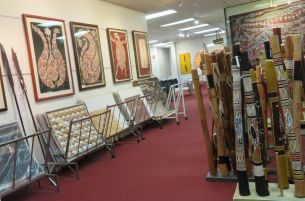 The Darwin area is best known as the gateway to Kakadu National Park, but a visit requires at least one night away from home and a healthy hike in the heat. Instead, we drove out to have coffee in Humpty Doo. With a name like that, it was a must see.

Beyond Humpty Doo, we stopped at the Fogg Dam nature preserve, an excellent place for bird-watching. There were crocodile warning signs all along the road, and I was happy not to see one. 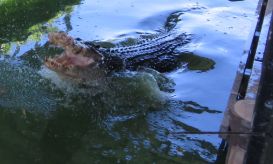 For a close up with crocs, we visited Crocodylus Park on our final day in Darwin. Crocodiles are a hazard in this region, but they are also protected. A recent article suggested that Australia’s success in protecting crocodiles has resulted in an increase in crocs as far as New Guinea and Indonesia. Sounds like a mixed blessing. Crocodile breeding is big business and relies on wild crocs to provide lots of eggs.

During the egg-laying season, collectors with special permits collect thousands of crocodile eggs from nests and bring them to facilities where they are raised in controlled temperatures, since precise temperature differences result in the hatching of males vs. females. Males are the delicate ones, needing to incubate at around 88° F. Otherwise, hotter or colder, the hatchlings are female. Australia exports both salt water and fresh water crocodiles, and croc skins for fashion products. I almost fell for a croc clutch for only AU$200. Then I thought, When would I carry it?

We had a great time in Darwin and wished we had allotted more time for our visit.

Preview (opens in a new tab)

Stepping outside the airport terminal in Darwin, the humidity wraps you like a thick fog. It’s over 90°F, and barely started on the walk to collect the rental car, our clothes are sticking to us. Our new Airbnb is nearby, our host is waiting, and we get all the instructions we need in short order. Two minutes after his departure, we are sitting in the pool. It feels heavenly, and slowly my brain comes back online.

We are in Darwin at a good time, the start of the dry season. It may not rain at all while we are here, there are few bugs, and the crocodiles are retreating into the estuaries (I don’t think I will be swimming, just in case). Within two days, we adjust to the weather by getting up early to look at birds and avoid the heat, shop in the air conditioned stores during the heat of the day, and swim or sit on the patio in the late afternoon. Cumulus clouds build into giant fluffy white mounds. They are the Queen Mum of clouds, in stately progress toward the horizon. There are a surprising number of new birds in our yard and the nearby park, and a pair of huge flying foxes (bats) come out of a nearby tree at dusk. 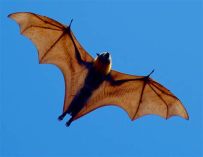 The last rays of the sun turn their leathery, translucent wings orange as they flap in a leisurely loop around the neighborhood (internet photo). When they return to the tree, they hang upside down. Folded-up, they return to their dark brown color, resembling a demented cat hanging by its tail. I’ve never seen anything like this. Welcome to Darwin, a different way of life. 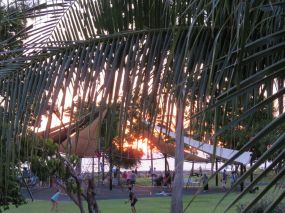 There are lots of places where we can watch the sun set over the water. An hour before sunset, the park between our house and the beach comes alive.  Families emerge to walk or sit and chat, while the “pock pock” of bouncing balls becomes noticeable. Bicyclists whiz along the path. The sounds of people in the parkland continues until well after dark. Streetlights come on but people disappear only gradually. It is much nicer out after dark than it was in the heat of the day.