After Tiwanaku, our goal for Bolivia was to see where Red-Fronted Macaws live in the wild. We drove to Cochabamba, setting out the next day for the Red-Fronted Macaw Lodge. At Aiquile, we turned off the Cochabamba-Sucre road and continued for 40 km on a road under construction until we reached Perereta, a hamlet beside the Mizque River. The landscape is dry and stony with steep cliffs and prickly vegtation. It reminded us of northern Arizona. Our local contact, Don Filemon, was out in his fields when we arrived. It appears we are the first tourists of the season. After a few minutes of uncertainty, a young neighbor showed us where to park. “No one will touch your car,” she said. We left it behind the house of Don Filemon and walked us across the suspension bridge and out to the lodge.  We’d brought backpacks with a minimum of clothing for our three nights because it was a 2 km walk to the lodge. We crossed the suspension bridge over the river then cut through fragrant fields of oregano. 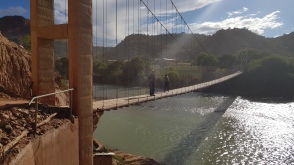 The lodge was rustic, but we avoided the shared bath by being the only people there. We saw our true goal of the entire trip, a pair of red fronted macaws flying overhead!

We watched others disappear into cracks in the cliff where their nests are located and we heard lots of their bass squawks. The night was impressive too. There were no outdoor lights and we could see the Milky Way looping across the sky. It was spectacular.

The next day we walked along the river, adding more birds to our list. In the afternoon, we walked the edge of the oregano fields. We identified many birds while sitting on the porch of the guest bungalow. This is definitely our kind of birdwatching, sitting at a table with a cold drink and binoculars, sighting new birds both mundane (woodpecker, hornero) and spectacular (blue and yellow tanager). The blue and yellow tanager has a Day-glo orange patch on its back, while the Purple Throated Euphonia looks like a flying peach. We loved it.

We managed to keep busy for our two night stay despite the absence of an internet connection. Our birdwatching was successful and we left with an appreciation for this region of dry scrub, red cliffs, and rivers, managing to see twenty-two more species of birds most of which we had never seen before. 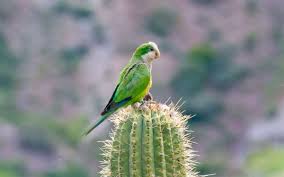 The Red-Fronted Macaw Lodge is a hostel type accommodation on the edge of a small refuge that includes the largest remaining breeding area of red fronted macaws, a critically endangered species. The refuge is a project of the civic association Armonia.com in association with local communities including Perereta and San Carlos. The goal is to help the communities benefit from tourism and give them a reason to preserve these birds. Sales of birds to the pet trade is a major cause of this species’ disappearance. They are also considered a pest by corn and peanut farmers. Without advocates, red fronted macaws will disappear.

We went out of our way to visit this reserve because of our own pet red fronted macaw, Simon. He was bred in Florida from birds taken from Bolivia in the 1970s. Based on our experiences, we can attest to the annoying traits of these birds, but Simon is also playful and curious. I no longer think that having a tropical bird as a pet is a good idea. Yes, they are beautiful, playful and intelligent, but they are also easily bored, often neurotic in captivity, plucking out their feathers and screeching incessantly. Most refuges for abandoned tropical birds in the US are full as people realize that their bird is going to be annoying forever. There is no humane way to get rid of them. 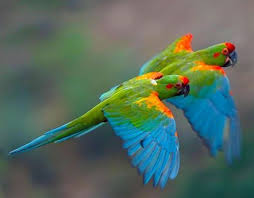 In the wild red fronted macaws are beautiful, flashing their olive green, blue, orange, and red feathers as they fly. They are relatively large birds and fly high above the valley floor into their nests in crevices in the stony cliffs. Their distinctive voice, a deeper and louder call than other parrots, echoes across the valley. In such an open space, it doesn’t bother you as it might from inside a cage in your living room.

Though we were enchanted by the opportunity to see Simon’s family in the wild the Red Fronted Macaw Lodge is best visited on a birding tour. When we arrived the housekeeper made us lemonade and asked us which bedroom we wanted, then made up the bed. We were given soap, toilet paper and towels when we asked. Our ability to speak Spanish helped things along. The bed was comfortable and the hot water in the shower worked. 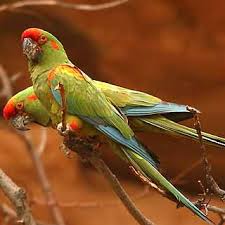 The downside to the refuge was the complete lack of information about the refuge, its size, age, how the community partnership works, where trails are located. There is no indication of how the $100 per person per night is used, whether a portion is tax deductible or how it is divided with the community. It was obvious that very little of the fee is used to maintain the guest quarters. That’s why I’d recommend visiting with a birding tour rather than independently as we did. It’s a place best experienced on a tour with a good guide. (The photos of birds are from the internet.)