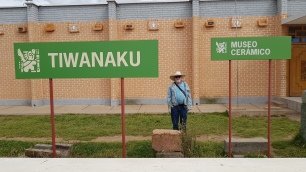 Most people visit Tiwanaku on a day trip from La Paz, spending about two hours at the site. We set aside two and a half days. After talking to visitors in our La Paz hotel we wondered whether we’d regret booking two nights at the Akapana Hotel around the corner from the site entrance. We could have used another half day beyond the two days we were there. We stayed at the Akapana Hotel, a block from the site. Our room was fine, the top floor restaurant was (grilled llama one night, trout the next). The enclosed parking is a must for us, and we were very comfortable in this miniscule town.

Tiwanaku was an ancient empire that controlled southern Peru and northern Bolivia for centuries (AD 400-900). The capital city lies on the altiplano, a high altitude (3850 m) open plain on the south shore of Lake Titicaca. The lakeshore has receded from the site leaving the gigantic buildings stranded. We began our visit in the afternoon of the day we arrived, starting with the ceramic museum and then following the path to the large pyramid in the center of Tiwanaku, the Akapana. The Akapana looks like a natural hill though some of the terracing used to build it has been reconstructed. From the top you can look out over the other structures. From the ground these are not immediately impressive but they make a satisfying meditative stroll.

The upper picture is a reconstruction of the step-sided Akapana. The lower picture is a photo of it today. We followed the paths out to smaller areas, enjoying the view across the landscape and imagining what it was like when it was first occupied. The modern town of Tiwanaku lies on top of what was the living area of the site in ancient times, so not much is known about daily life.

The next day we visited the large enclosure called the Kalasasaya a low platform that was originally walled. On one corner is the best known artifact of Tiwanaku, the Gateway of the Sun. This portal was originally a massive piece of stone heavily carved and inscribed on one side. It was identified in the mid 19th century, already broken into two pieces as it is today. 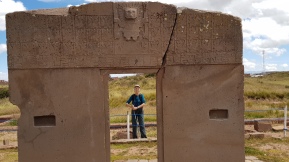 No one is sure where it was originally located and 19th century drawings show that it has been broken into two pieces for at least the past 150 years. The carving is quite detailed, showing the Andean deity often called the Sun God. The image can be traced back through many ancient Andean civilizations.

The semi-subterranean temple has the most distinctive decoration, with more than 100 tenon heads projecting from the four interior walls of this structure.

Tiwanaku is known for a number of monumental stylized human figures, El Fraile and the Ponce Monolith among them. The biggest and best preserved is the Bennett monolith. Identified by the American archaeologist Wendell Bennett in 1932, this statue is over 20 ft high and so impressed people that it was carried off to La Paz and set up in several locations between 1932 and 2002 when it was returned to Tiwanaku. Today it can be seen in the Lithic Museum at Tiwanaku where it dwarfs the room that houses it. 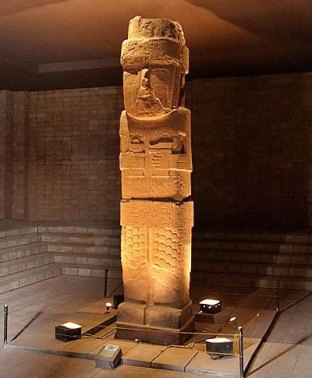 Bennett Monolith, fine carvings all over the surface 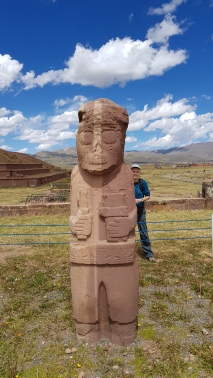 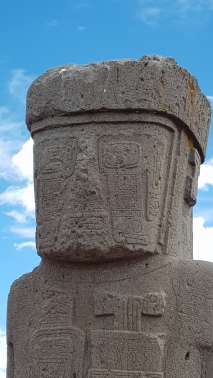 Ponce Monolith, fine carvings all over the surface

Both the Bennett and Ponce Monoliths (R, L) have fine designs carved over their entire surface, like the Gateway of the Sun.