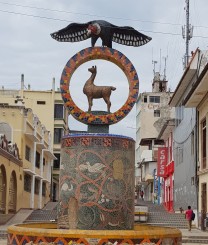 We went to Tumbes because it was there. We said we were going to northern Peru and that’s as north as it gets. The Plaza de Armas has two elaborate monuments facing each other, a condor and llama on one side and a giant band shell filled with faces and figures on the other.

I’m not sure I’ve seen another civic monument quite like it. We had lunch in Tumbes at Eduardo El Brujo, ceviche and fried calamari. The restaurant is upstairs around the corner from the Plaza de Armas. To make sure that clients get there, several people stand in the street indicating parking spaces and showing visitors where the door is located. We were interested to see that on the day we visited, most of the diners were locals having business lunches. No one drank alcohol with their meal, though having a beer or two with a seafood lunch is normal for vacationers.

We stopped at Puerto Pizarro, the supposed site of Francisco Pizarro’s entry into Peru, the first step in a chain of events that devastated the Inca Empire. Lowlife Pizarro and his brothers melted down Inca treasures to make ingots. They had no sense of history, and no recognition of other cultures. We’ll never know for sure what they melted down, rumored to include an entire garden made of gold and silver.

Puerto Pizarro is the launching spot for tours of the Tumbes mangroves. We preferred to do our birdwatching from the shore and saw enough to keep us looking. 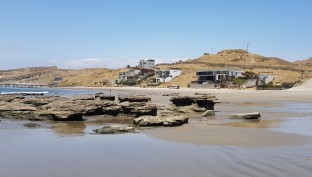 The next day we went south along the coast on an unpaved road that runs from Playa El Nuro past Cabo Blanco. We had been to lunch at the excellent Cabo Blanco restaurant with neighbors from Playa Los Organos, Darryl and Arla. They invited us over to chat on our first day in the area. They built a house about ten years ago and it now is surrounded by a lovely garden area. We decided to go to lunch together and they introduced us to the Cabo Blanco area. Our return trip was a chance to walk on the beaches.

Some of the coast is very rugged, with natural terraces of rock extending up the hillsides. For now the shore is still largely empty and untamed, though that may change as new houses and hotels are being built all along the coast among the folds in the hills.

Our hats are now so big that there is hardly any room in a selfie for anything else. This week has been much hotter around Playa Los Organos than in Barranca. Hats keep the sun off and that’s what’s important. We could have continued down the beach indefinitely, collecting driftwood and seashells, cooling off now and then in the ocean.