I thought I knew about Manhattan, having visited quite a bit while growing up and having lived in couple of neighborhoods. I’ve ridden on the Staten Island Ferry and been to the Statue of Liberty. Both require you to go to the toe of Manhattan. What I skipped over until this trip was the neighborhood just inland from the Battery that includes Wall Street. Now that Lyra lives there, we stopped in for a visit and it is a very enjoyable part of the city.

We stayed at the Wall Street Inn (on S. William St.), a very comfortable small hotel with an excellent breakfast included. It’s also near subway stops, but its greatest asset is being located right around the corner from our daughter’s apartment, by Delmonico’s. (We did not eat there on this trip.) 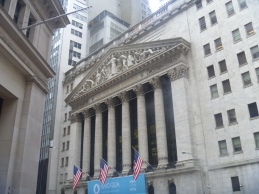 We did take in the sights nearby and there are many. We stopped in front of Federal Hall on Wall St. where George Washington was inaugurated as the first president of the US.

We saw historic Trinity Church and its churchyard.

The former US Customs House, just down the street from Federal Hall, overlooks Bowling Green. Today it is a branch of the National Museum of the American Indian and holds the collections that were formerly the Heye Foundation. It was difficult to visit before moving to the Customs House, because the building was largely storage and had limited display of collections. The museum was located way off the beaten path on 155th St. and Broadway. Now the museum is at the Bowling Green subway stop and the new exhibits show the rich collection of materials from North, Central and South America. I particularly enjoyed seeing the pottery from Costa Rica and Panama that reminded me of the time I spent in Costa Rica while working on my dissertation and how much I admired archaeologist Olga Linares for her book on the imagery on Panamanian pottery, “Ecology and the Arts in Ancient Panama.”

A scary plate from Panama. 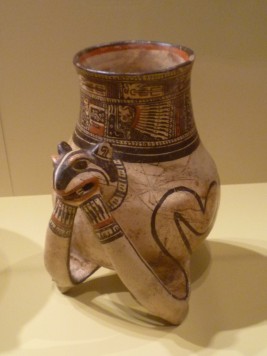 “The Thinker” as a rabbit, from Costa Rica

There is also the Wall Street Bull, though it was ass deep in tourists. The “Fearless Girl” statue facing the bull was put in place in March 2017 and was still there.

Just two blocks beyond is the shore, lined with a walkway that is used by strollers and joggers alike. Once you get beyond the area where visitors to the Statue of Liberty and Ellis Island congregate, it is a relatively peaceful and uncrowded part of the city.

The view out over the water to Liberty herself and Ellis Island are sublime. It’s a great neighborhood.

One thought on “Something new: the toe of Manhattan”