On our way north along the coast of Ireland, we stopped to see the Cliffs of Moher, one of Ireland’s staggering sights. People look tiny standing on the edge of the 390 ft. high escarpment. It was impressive (Look for the tiny, tiny people on the top of the cliff).

Before you rush to book your trip, keep in mind that we were there with 20 bus loads and hundreds of cars full of other visitors. The Cliffs of Moher is one of the most popular sights in all of Ireland, with about 1 million visitors per year. That’s more than 2,000 people a day all year long. That’s a lot of people.

From the cliffs we headed toward Galway, our overnight stop halfway to Bundoran. The road cuts through an unusual geologic formation called The Burren. From a distance you see gray, stony hillsides. These rocky places are home to unusual plant species of both alpine and mediterranean origin. 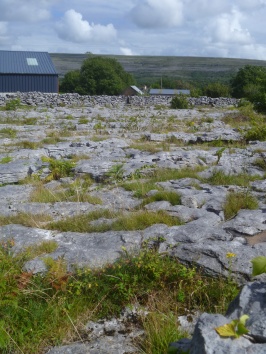 We stopped to take a photo and when I got out of the car and looked over the nearest stone wall, I was face to face with The Burren. Plates of gray stone cover the ground, with plants growing up through the cracks. I couldn’t imagine why anyone would wall in an area like this. (From Wikipedia):The rolling hills of The Burren are composed of limestone pavements with criss-crossing cracks known as “grikes”, leaving isolated rocks called “clints”.

OK, whatever you say. Grikes and clints. It is a remarkably stony landscape. I have never seen anything like it.

Further on, we passed a castle and found out it is the Burren School of Art. It would be  a lovely place to study.

We ended the day with dinner in downtown Galway and a stroll through the pedestrian area. It was very lively as we happened to be in town on the first night of the Galway Races. The horse races were being broadcast on every TV. They ended around 8:30 pm and by the time we finished dinner women and men in their best Race Day clothes were pouring in for an evening on the town.