Rain and a lost suitcase notwithstanding, we are now settled in Edinburgh. A quick history review suggests that Edinburgh has been here for so long that it’s not clear when the first hut was built on the crag where Edinburgh Castle now sits. Bronze Age artifacts have been found in the area, putting people in the area before 750 BC, though occupation of the greater British Isles goes back to the Mesolithic, at least 8500 BC. People may have been able to arrive on the islands on foot across what is the North Sea today.

By the Middle Ages there was a hillfort on the site, and the settlement and surroundings became part of the Kingdom of Northumbria. A long and complex history of kingdoms that grew and fought, rising and falling across the centuries developed into the historic record that most of us only know from movies like Braveheart and the novels of Diana Gabaldon (Outlander). I won’t even try to summarize Scottish history, as I’ll be sure to overlook something. This is a story that has something for everyone. I encourage you to google a question about Scotland.

Paula will only be here until Thursday, so we set off to see a little of the city once we had a good night’s sleep. We started with the Royal Mile. It begins at Edinburgh Castle.

Here I am, blending in. 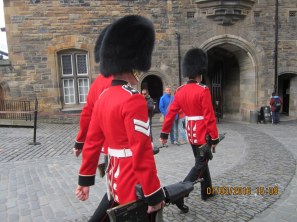 We didn’t realize there was a changing of the guard here, but there they were. We’re also in Edinburgh when the Queen is in residence at the opposite end of the Royal Mile, at Holyrood Palace. She opened the session of the Scottish Parliament just as we arrived.

The palace is off limits to visitors until July 10, by which time the Queen will have gone on to her other activities, or another of her Scottish palaces. 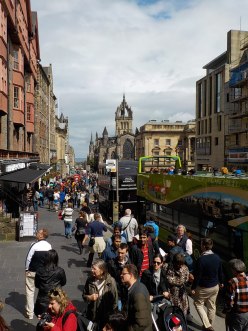 The Royal Mile between the castle and the palace is full of lovely, turreted and elaborately dormered windows. From here you can see the unusual “crown” steeple on St. Giles cathedral. It was a sunny Sunday afternoon and lots of people were out.

The ground floor of each hosts a tourist shop of some kind. We saw more tourist shopping in one afternoon here than in a month in Norway.  It will be easy to find postcards here. 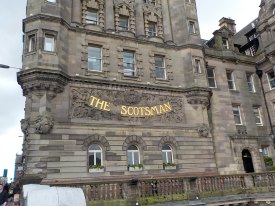 This was one sight as we approached the Royal Mile. As a fan of the Isabel Dalhousie series of novels by Alexander McCall Smith, I was reminded of Isabel drinking her morning coffee and reading The Scotsman.

I went to read the Scotsman and found that the weather forecast is for rain, rain and more rain. Maybe I’ll stop reading the paper.