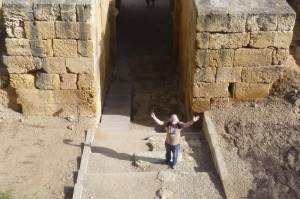 Tarragona, Roman Tárraco, was the capital of Hispania Citerior during the Roman Republic, from about 197 BC until 27 BC when the emperor Augustus arrived. He stayed until his death in 14 BC, making Tarraco both capital of his new province Hispania Tarragonensis and the unofficial capital of the Roman Empire. The emperor’s presence fostered prosperity and expansion that continued during the first two centuries AD. This link provides an excellent summary of the story of Tarraco:
https://www.tarragona.cat/patrimoni/museu-historia/en/history-of-tarragona/roman-tarraco

Our visit was confined to the oldest part of Tarragona, partially encircled by the remaining Roman walls and originally the location of Roman military barracks and the provincial forum.

We had a great field trip. We took the train, even changing platforms (ooooh) and using our Tarjeta Dorada to get our senior discount. The train takes a bit longer than an hour. We paid 9.70€ each for a round-trip ticket. I checked the train that only takes a half hour (AVE). If I read the schedule correctly, it was about 31€ each way. (Can that be correct?). Just down the street from the train station is the amphitheater, our first stop.

The seats are largely restored but there is a lot of Roman construction left, along with the remains of a Visigoth church and a later church. They overlap one another and comprise the cross-shaped structure in the center of the amphitheater. It is a gorgeous location with the Mediterranean in the background. It was sunny and warm all day, Oct. 30.

Up the hill and into town, the closest corner of the old walled city brings you to the Placa Reial and the National Museum of the Archaeology of Tarragona, with artifacts from before the Romans up through the many historic invasions and rebuildings. We focused on the displays of materials related to Roman daily life, and the mosaics. Like the other archaeological collections we’ve seen on this trip, they have beautiful glass, from vials to large pale blue jars with lids. I wonder what they kept in them? Beyond these things is the display of mosaics, actually on two floors.

This is a portion of a much larger mosaic with sea creatures showing lots of personality. See the sad fish near the bottom looking at the hermit crab?

After the museum we walked the archaeological promenade, a landscaped path between the inner Roman walls and the later outer walls. The earliest surviving portions are huge rocks that form the “cyclopean” base of the Roman walls from the beginning of the 2nd century BC. Expansions took place up until the construction of the final outer fortifications during the War of Spanish Succession in the 18th century. In places, the walls are 15 m high and 6 m thick. 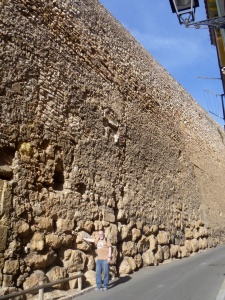 There are two surviving towers, as well. 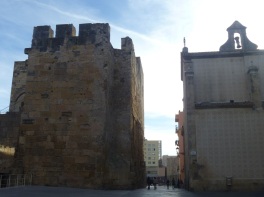 The description of the tower on the left includes the two rows of arrow slits, the machiolations (spaces where rocks can be dropped on the attackers below), and the crowning row of merlons (tooth-like upright rock). Castles have their own vocabulary.

We chatted with a man at the “maqueta”, or scale model of Roman Tarragona. He said that buildings in the old portion of the city were becoming increasingly difficult to renovate because of the requirements to conduct an archaeological excavation any time the ground is opened. If nothing found is new or considered significant, it can be covered, but ordinarily remains cannot be removed. Significant finds have to be both excavated and preserved below whatever work is eventually carried out above ground. The man we spoke with told us that more and more properties are being abandoned rather than renovated. He pointed to a building that we had noticed, wrapped in netting and labeled with a big placard about renovation. He said it has been at a standstill for the past three years awaiting a budget to complete renovation.

This is a sad situation, since the area would be lovely as apartments. The alternative is to turn the old city into a Disneyland, importing people to work the tourist places, but leaving the area empty at the end of the day.

Just outside the old city walls we sat in a park to eat lunch. There was a public drinking fountain and we shared the area with school groups doing the same as we were, visiting the old city and having a picnic. Sections of roadway in the old city and sidewalks nearby have been repaved with colorful pebble mosaics.

This seems too pretty for a sidewalk–I love it. Can you tell it does not snow here so there is no need to use a snowplow and chip out part of the mosaic every winter? At the end of the afternoon we strolled back to the train station and returned to the big city, leaving Rome behind for the moment.