We spent two full days exploring Roman Barcelona and now, much later, a day in Tarragona (we could have stayed a week), visiting the Roman ruins there. Archaeology is alive and well in both cities. This post is on Barcino, the next on Tarraco.

In Barcelona, there is an ongoing program of archaeological excavations in the area of the Roman walled city that has been underway for many years. A guide to walking around the Barri Gotic, the oldest portion of the city that still retains a bit of Roman wall and street layout, includes stops at surviving places. We found that the Roman features were right under our noses in places that we had already visited, but only with a list that said to look here, look there, did we see the Roman remains underfoot.

An archaeologist’s puzzle. Which wall came first, and what happened after that and after that?

There is a Roman cemetery in a park beneath the streets. 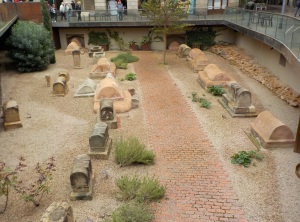 The convent over the tombs burned down in 1936 and the area underwent urban renewal in the 1950s when these were discovered and incorporated into the landscaping of the area, now called Plaza Vila de Madrid. http://www.barcelonaturisme.com/wv3/es/page/492/muhba-via-sepulcral-romana.html

The tour of Roman Barcelona took us all over the old part of the city and showed that the part of the city retains the shape established by its Roman walls. The walking tour ends at the Museu de la Historia de Barcelona (MUHBA). This museum was established when renovation in the city center revealed the remains of occupation from the Romans up through the Middle Ages. Archaeological investigations ran continuously for more than 30 years and continue from time to time today. A network of stairways, ramps and boardwalks over the ancient remains is accessible to visitors. The associated information shows the relationships among the different eras represented, but it is a maze of interwoven layers. Even with the detailed presentation of levels and layers, we had trouble following what went with what. The fact that a Roman city lies below Barcelona and a portion of it is there to look at is fascinating. 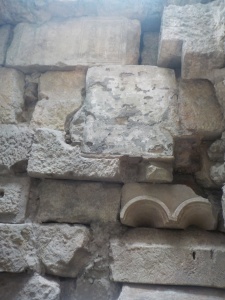 This wall of miscellaneous stone includes various shapes and one with a Roman inscription. Materials were reused over and over. 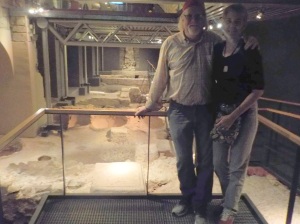 We are looking over the wine-making facilities of an ancient occupation. The archaeological work continues for a very extensive area underground.

Later, when we visited the Santa Caterina market, we found there is an extensive section of preserved excavations under the market and the plaza in front of it. This isn’t surprising, as the market is one block east of the cathedral. The posted information traced constructions back to the 11th century in this area, though there could be even early material below the stone buildings.