Now that you know we’re talking about Salvador Dali, I can assure you that he was immensely creative despite being as weird as a two-headed cat. We rented a car and drove to Figueres to visit the museum that Dali designed himself. That’s part of the problem, letting a surrealist design his own space. It doesn’t even look surreal, just ???? A barn-red tower topped with huge eggs and dotted with replicas of loaves of bread. (Huh?)

Dali was thrown out of a Surrealist painters group because he was considered too focused on money. He went to New York, and drew or painted anything that anyone would pay him to do. Eventually, he created this museum in Spain and lived not far away for the rest of his life, failing to burn himself up but burning one of his houses down in the process. A lot of his work seems hasty, but I believe that’s because he was so full of ideas. For example, who could even think of this: Mae West as an apartment. 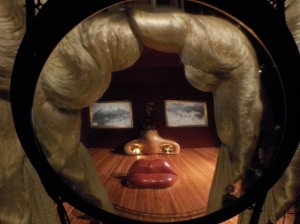 The original is a painting at the Art Institute of Chicago. This is an actual room in the Dali Museum, but to see it complete like this, you have to climb some stairs and look at the room through a convex glass that hangs from the belly of a fiberglas camel, and peer between the huge acrylic tresses. Honestly, who could even think of this? Once you have the idea, you can start imagining all kinds of people as apartments, but who could imagine such a thing to start with? Dali.

Dali was bursting with ideas. There is a series of sketches where he seems to have been emptying his very busy and tightly packed brain onto sheets of drawing paper and they include a lot of misogynist imaginings. We know he absolutely adored his wife Gala. The paintings of her are spectacular, but buried in among all that was some pretty uncomfortable imagery, if you’re a woman, or have any nerve-endings. 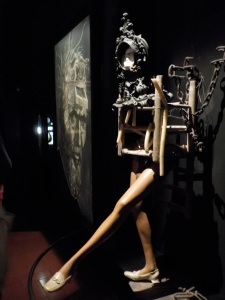 There are lots of quirky exhibits, like this African mask, embellished and placed in the stomach of a huge bird. 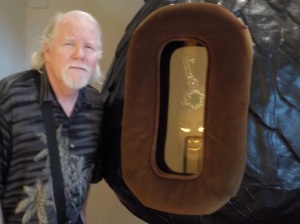 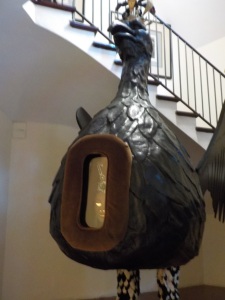 I stopped taking photos, because the place is both overwhelming and slapdash. Some of the art is excellent, but some appears hasty, as though he had so much on his mind that he had to keep moving. There is a ceiling full of “bats” that turn out to be painted burlap bags. There is another ceiling full of galvanized buckets.

The highly detailed, carefully painted pictures like the melted watches that he is known for are largely elsewhere. The painting that I found on a postcard and sent to the whole family is one that reminds me of Jonathan: Self-Portrait with Bacon.