It was our week in Montjuic Park, where we spent one day walking from the castle along the ridge, looking at the commercial harbor. We watched a container ship back in to a slip. I was sure it would all be done electronically, after all, a person is so small that the idea of pulling a supertanker with a rope seemed impossible.

The ship backed in as neat as you please and then tossed a rope to a guy on the wharf. He dropped it over a bollard and the ship pulled against the rope to move the bow in to shore. What is that rope made of? This is a container ship we’re talking about.

Next we strolled around looking for the Botanical Garden. We had a lovely walk, but never found the garden. We did find a couple of birds, a nice change from the pigeons and Monk parakeets that have taken over most of the city.

After that, we looked up the location of the Botanical Garden and went there. It was lovely. A temporary exhibit in the Botanical Research Institute showed the personal cabinet of curiosities of the Salvador family that now belongs to the Botanical Garden. In addition to 1200 plant samples that are now part of the herbarium, some of the original painted wood cabinets and drawers survive and were on display, along with some of the original collected materials, from as early as 1714 and kept together until well into the 20th century. 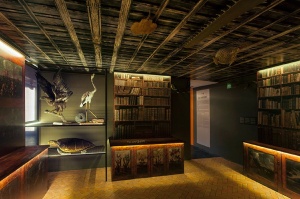 Specimens like this sea turtle are part of the reason there are so few left in the wild.

The Salvador family, who owned this collection, held onto it for five generations, though there was decreasing interest after the first hundred years. Fortunately, the cabinets were left in the pharmacy building that the early generations ran and though deteriorated, it was never discarded. The collection was an important scientific venue for the entire city of Barcelona at the turn of the 19th century. The present exhibit was developed for the tercentenary (1714-2014) of the collection.

Compare this one with the cabinet of curiosities created by the Tradescant family (father and son) in England. These ‘Keeper(s) of his Majesty’s Gardens, Vines, and Silkworms’ traveled widely for their times and  their cabinet made its way to Oxford and formed the nucleus of the original Ashmolean Museum.

When we were bird watching, we saw all the mounted birds shown in the Salvador’s cabinet (except the owl)–the flamingo, stork, marsh harrier and duck.

Most of the live birds have more color than the ones in the cabinet of curiosities that are more than 100 years old.There was a large flock of storks in the marsh we visited last week, but this one perched close to us and didn’t mind the photos. When I looked closely at my picture I noticed he has only one leg. He might need to stop in at the nearby wildlife rehabilitation center. Maybe he already goes there for PT.

Last but not least we visited the Archaeology Museum. Spain has a very long record of human occupation and this was well illustrated. The archaeological details throughout were largely based on sites in Catalonia. I was impressed by how much a person from this region could relate to history of the ancient past from its tremendous continuity.

The recently reopened Ethnographic Collection is near the Archaeology Museum, also in Montjuic. The exhibits were on everyday life in Spain in the past, organized by industry, interesting, but not novel. In contrast, the open storage on the ground floor was wonderful to look at. The permanent collection includes the most extensive collection of ancient glass that I’ve seen on display this side of the Corning Museum.

Montjuic is a remarkable city park when you realize that it holds the Museum of the Art of Catalonia, Miro Museum, all the places I’ve just mentioned, and the stadium and swimming facilities left over from the Olympics. Throw in a cable car, the Magic Fountain, views across both the city and the Mediterranean–it’s pretty comprehensive entertainment.