That was the name of a poem I had to memorize in about 3rd grade–I don’t remember anything but the title. The description is very apt, as the days have been exquisitely blue and bright, even as the sun rises a bit later and sets a little earlier every day. We’ve visited two large city parks, the Ciutadella and Montjuic, as well as spending another day at the beach. I even went for a dip. 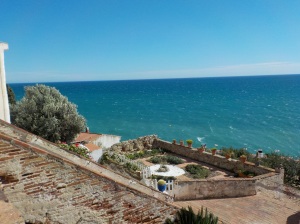 The Mediterranean from the Ermita de Sant Pau in the town of Sant Pol de Mar. There’s not a lot in the town, but walking to the top of the hill provides this gorgeous view, and the hermitage (we’re standing on its terrace) is the oldest building around, started in the 10th century. The beach is the real draw here.

In the city, we are now focusing on the great parks. The Ciutadella seems to have been intended as a multi-site natural history zone, but that was around 1888. Most of the buildings were repurposed or are currently abandoned or semi-abandoned, while the collections have moved elsewhere. An eclectic group of stops remains. There’s the spectacular “Monumental Fountain” 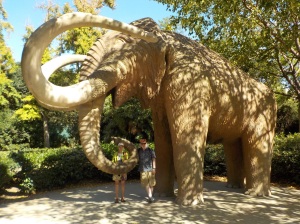 And a lake with rowboats:

The science museum buildings are all from the modernist era: 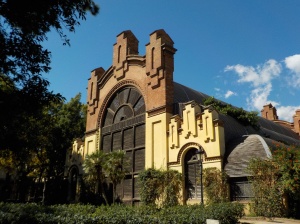 This, for example, is the Umbracle, or shade house, a building with a slatted roof but no windows so that air circulates but the bright sun doesn’t burn the leaves of tender plants. There’s also a Hivernacle, or green house. I would have liked to have my office in the Castle of the Three Dragons, now a science research library.

The idea of science in the park is lovely, but the reality is not. All the buildings we visited are in disrepair, the castle above is roped off for repairs and closed to the public. The contents of the plant houses are well on their way to running wild and the greenhouse has broken windows. A homeless woman was drying her clothes on the greenhouse fence. 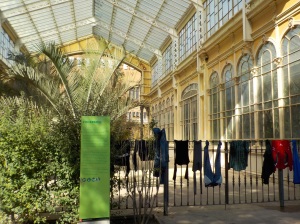 When we went home, we tried to find out what had happened to natural history, as the large geology museum between the two plant houses was also closed, and abandoned-looking. The collections have all been moved to a large contemporary building, the Museu Blau, in another part of the city. What is discouraging in terms of promoting science to the public is that there is no explanation at all about the buildings in the Ciutadella park, among the most heavily visited in the city. A visitor is left with the idea that there is no interest in science, because there is nothing to tell you why these vintage buildings are abandoned or where you can find the science museum today. Since there is an effort to preserve every structure considered modernist and the structures in the park seem to be in the limbo between active use and repurposing as part of the “modernism route.”

Next time we’ll visit the zoo, located in the southern portion of the Ciutadella.