We watched a projection called Awakening the Dragon, at the Casa Batlló, one of Antoni Gaudí’s bests known architectural works, the night before the end of the festival. 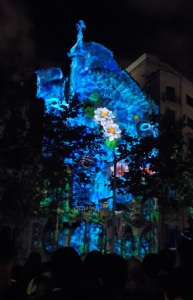 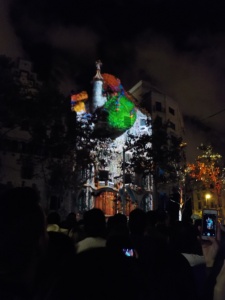 It does look like a big lizard is crawling around the roof. The roof line, altered by Gaudi, is an undulating form that was said to be reminiscent of a dragon. The park Gaudi designed, Parc Guell, has a fountain with a centerpiece of a huge tile-spangled iguana (ish) animal. Hence the images in this show.

The structure, the Casa Batllo, is among the showiest of Gaudi’s works, with undulating balconies that are depicted in one video as frog mouths. The group that runs this house has the strongest social media presence of all Gaudi’s work in Barcelona, including these periodic projection nights, photo contests and family activity days. It may be a case of survival of the media-savvy.

We saw a lively musical group Sabor de Gracia, on Placa Catalunya on Wednesday evening on our way home from Casa Batllo.         They’re on Apple music.)

The next day at noon we watched the parade of ALL the city’s giants. Part of the time we were sitting in a cafe while we watched, an almost perfect venue. The giants ranged from highly realistic figures to fanciful Sun and Moon figures. Every stereotype you can imagine is presented. (If you dance down the street, then it’s not a bad stereotype, it’s just a…….big puppet!).

There were kings and queens

(Is that the Gatsbys?)

Is that a friend of Putin? (or was it Berlusconi’s friend?) 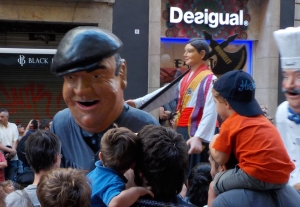 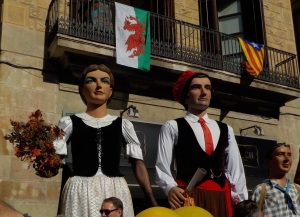 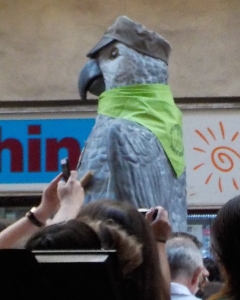 And a lot of others.

The final element was the fireworks, music and colored fountains. It was the biggest fireworks display and the biggest crowd I’ve ever seen, estimated at 108,000, packed across a large plaza and all the adjacent streets in front of the Palacio Nacional (the National Museum of the Art of Catalonia). After it was over, we were surprised at how well-organized the subway was, with personnel letting people into the station in waves, then holding the crowd until the station was clear and continuing. Trains arrived every 2-3 minutes. We were home in less time than it took to get from our viewing spot to the subway, shuffling along with the crowd. Below is the youtube video. There are others more professionally done, but this one gives you a sense of the fireworks, searchlights, tubes shooting flames, smoke, and the fountain changing colors.

And that, was the end of the festival. What a week! The city’s patroness should be well satisfied for the coming year.