Barcelonans are fearless. They make human towers up to eight people high:

Keep in mind that the people you see at the bottom of this photo are the second tier. They are all standing on people underneath. 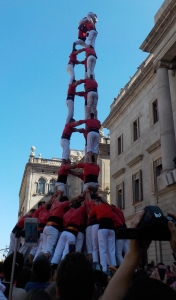 Barcelonans also take small children to the Correfoc, the Fire Run, where they are likely to be scared out of their wits.

It is night. There is a big portal covered with horns, or flames. 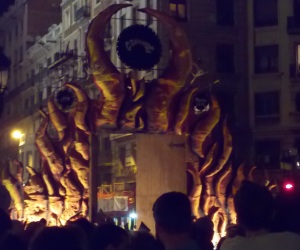 It opens to admit so many drumming groups that the area becomes a single wall of deafening sound. Then the lights change:

This is followed by a series of large fireworks that are exploded over everyone’s heads. You’re supposed to know to bring something to cover your head from the sparks and floating bits of carbonized paper. The smoke can’t be helped. 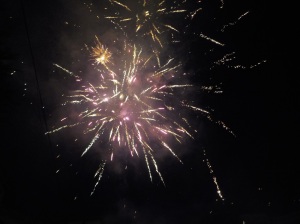 It was a wonderful display–I’ve probably never been so close to fireworks. Since we were about 20 people deep around the plaza at that point, it’s probably a good thing no one caught on fire from the falling debris.

Next, the demons emerge and are set alight. They spit sparks and blow off fireworks at the crowd. It looks like the neighborhood is igniting. These burn out about every 3 minutes and have to be charged again by a guy with a box of fireworks who wheels along after each demon… This is a very slow parade but very showy. The entire route is three blocks. 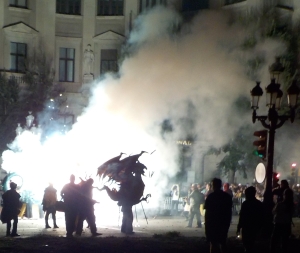 This is an exploding mosquito with glowing red eyes.

Groups of people dressed as devils take turns lighting their super-giant sized sparkler holders and then twirl them as they move down the street. The sparks cover everyone.

Here they are lighting up.

Here’s where I’m glad I’m not right along the route.

Tell me that doesn’t look like the building going up in flames.

There is never a tranquil moment. It’s all out noise, drums, sparklers crackling, explosions and chanting. Groups take turns to enter through the gates, light up, and scare everyone along the parade route. Just another fun evening in Barcelona during a religious festival.

Group members wear horned capes so you can see their horns and they won’t burn their hair.