I somehow skipped over the most recent low tide beachcombing. The tide is not particularly low but it is fun to go out and walk along the tide line and see what’s there. We began at Jughandle State Park, walking along the rocks, and ended up on the beaches there. Low tide was around 10:20 am, so we left home around 9:30 am, early for us these days, and started our walk before low tide.

The sea was pretty rough, no boats out, but the wind wasn’t bad, and the beachcombing was excellent. I found two complete abalone shells right on the beach. Jonathan saw them from the bluff above, but he couldn’t get to the beach before me. 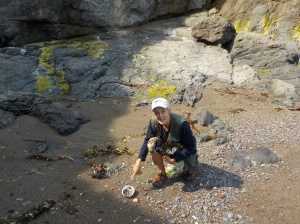 The freshness of the shells and the fact that they still had abalone muscle clinging to them in places strongly suggests these are poachers’ leftovers. Each shell has a chip broken off the side, as though roughly pried off the rocks. Legally obtained abalone aren’t removed from their shell on the coast. The legal tag runs through the shell and cannot be removed until the abalone is being prepared to be eaten–someone who pried the abalone out and tossed the shell in the ocean in shallow water is almost certainly a poacher.

If this wasn’t enough, we walked along the bluffs near our house in the afternoon and saw a herd of deer grazing in the field covered with fog.

We decided not to go down onto the rocks when we saw that someone had arrived before us: 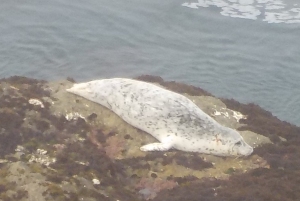