We set off to go into the wilderness, the Sinkyone (Sinky-own) State Park. The park has a herd of elk that hikers often see. After choosing a possible hiking route, we packed our lunch and set off. Not too far before the turnoff for the park we came up to a field and found people pulling off. There were three BIG elk grazing, two in the field and one right beside the road!

We got to the turnoff from Highway 1, onto the Usal Road. The trail head was 6 miles in at the crossroads that is Usal. It’s about another 15 miles or more to the visitor’s center, which we are assured has a water tap, but no other facilities and no resident ranger. From there, a few people with 4wd get further before they begin hiking.

At the top of the first hill, about two miles in toward Usal, we saw an area being logged.

Since we had bottomed out 3 times already, we realized that we were not going to make it to the trail head, not to mention the visitor’s center. Reluctantly, we turned around. On the bright side, we no longer needed to hike deep into the park to try to see elk…

The road back gave us some sensational views of a section of the “Lost Coast”. The name comes from loss of population during the 1930s, and since that time, the general abandonment of the northern California coast from Mendocino to Oregon. It seems to be extremely challenging to build along this coast and today, most of this rugged coastal region is state wilderness. See that narrow beach on the left. There doesn’t seem to be any way to get to it! 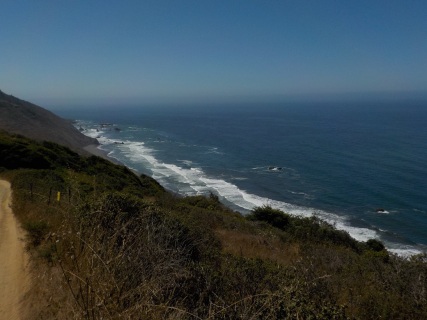 When we got back to Rte 1, we decided to visit Leggett, the next town down the road. It turned out to have limited services–mostly businesses that were closed.

Not far beyond Leggett was “The Peg House” a cafe in the middle of nowhere, set between two state parks. We split a delicious Reuben sandwich and a wild blackberry sundae, seated under a parachute.

Not far down the road was a beautiful redwood grove. 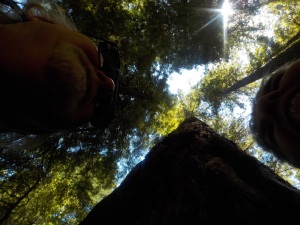 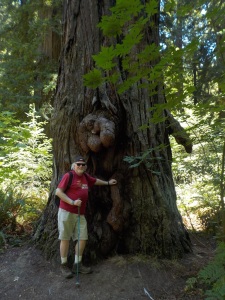 On the way back to Ft. Bragg, we stopped to pick wild blackberries, that I later made into a delicious sauce for ice cream.