I believe everyone says “where does the time go”? They’re right.

The Mendocino Music Festival got into high gear this week and we attended three events, the California Honey Drops, a concert of five groups “A Capella Fever” and a fully staged opera, The Barber of Seville. The opera was my favorite so far, it had a simple but effective set, clever staging, and wonderful, strong, well-matched voices. Besides, this is a funny opera, no one dies. (Is it opera if no one dies?)

Each one was better than the last and we still have one concert to go next week.

Between concerts, there was still lot of coast to explore, fish not to catch, and birds to identify.

We checked the tide table and planned to go snorkeling near low tide on Tuesday. The forecast was for warm weather, into the 80s, all week long. On Tuesday, we got up to heavy overcast, temperatures in the low 60s and a small craft warning (wind and waves) through Friday night. We decided against snorkeling (!), and drove down to see Point Arena pier. We tried fishing, but no luck. We did try both the Manhattan and New England clam chowder at the chowder house on the pier.

We made an interesting discovery on our way out of town. In Point Arena, the Senior Center and the Druids meeting house are the same place….

On the third Wednesday of each month, there is a bird watching visit to the botanical garden sponsored by the local Audubon club. A good-sized group of us met at 8 am and entered by a side gate. About half the group were local members and half were people like us who had read about the visit and just showed up. Our leader, Tim, said that this was not the beginner bird walk and would focus on identifying birds by ear. The combined expertise and eyeballs of a group yielded lots of birds and good company. Each person seemed to have a suggestion about how to identify birds or how to see them in the trees. We saw a young hawk sitting on the top of a tree begging for food. Apparently, it is old enough to hunt and the parents stop feeding it to get it to go out and feed itself, but some resist growing up. (Sound familiar?)

We also saw woodpeckers, warblers, bushtits, sparrows and seabirds. Most were moving too fast to photograph, but the gardens are irresistible for photos. 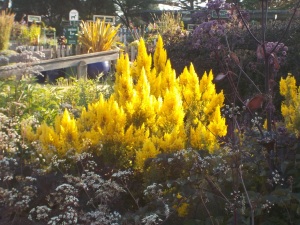 Though we waited for the wind and waves to abate, they did not, so we went on a field trip to Ukiah to see the Grace Hudson Museum and Sun House (her home). 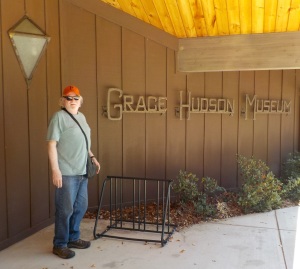 The museum has four exhibit areas. Two small spaces show Hudson family history and Pomo baskets. A larger space exhibits Grace Hudson’s paintings. This was a bit of a shock as I knew nothing about her as a painter, other than that she was very successful in the late 19th and early 20th century. Her paintings are big-eyed, red-cheeked Pomo children, and some adults. The notes indicate that she was accurate in the details of clothing and household goods, but the people are obviously idealized. This was popular?

The front exhibit space was on contemporary Japanese bamboo weaving. It was a lovely exhibit with spectacular objects that involved a lot of intensive labor. Most artists shown are older Japanese men (one woman), and may take a year to create one piece. In a few of the cases, Pomo baskets from the museum collection were added to contrast a technique, and that was quite interesting.

I had expected to see more Pomo baskets, because that is what Grace Hudson and her husband were known for collecting. When you read about them, though, you find out that John Hudson worked for a time as a curator at the Field Museum under George Dorsey. Any collecting he did would have been for the Field Museum, which has a collection of baskets Hudson made. After falling out with Dorsey, Hudson returned to California and amassed a collection of Pomo basketry that he sold to the Smithsonian to finance construction of their home, that they called the Sun House. Perhaps there wasn’t much time or money left to collect their own baskets.

Our field trip to Ukiah showed us how lucky we are to be on the coast. In mid-afternoon in Ukiah it was 102º, breathtakingly hot. We drove back to Ft. Bragg through the redwoods and by the time we arrived, it was in the high 60s. It may not be swimming weather, but it is more comfortable than 100 degrees.

Friday we returned to Bruhel Point (see previous post) to do some more fishing. We saw this butterfly while crossing to the rocks from our parking spot. I haven’t been able to identify it.

Once again, the fish were not with us. The water was pretty rough and we ended up hiking along the rocks to check out a small blowhole.

Is scum on the ocean natural or man-made? There was no obvious source for this.

There were some nice tidepools on the rocks,

We hiked back to the car and called it a good day, even if it was still overcast and cold. After all, we could be in Ukiah!

The Art Center shows art, holds classes, invites visiting artists. I looked at the list  of classes, but they seem to let artists teach what they want, so there are no beginner classes and lots of painting on silk and electroplating, etc. These seemed way beyond beginning watercolor…..

However, I did my best to support local artists by visiting every booth in the show and buying a sensational blue beaded necklace from Carol Bernau, an artist from Oakland [Adornable, Art to wear for the young at heart]. My outfit didn’t exactly match, but I am sure I can find something better at home. 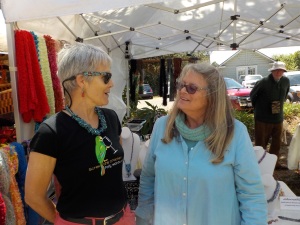