I read about Cassowary House online and it sounded like an unusual place to stay overnight and do some birdwatching. This small, family-run guesthouse just above Kuranda is set in a thick patch of rainforest, with frequent visits from local birds, including a cassowary or two. We’ve seen cassowary in the zoo and animal parks, but visiting Cassowary House would be a chance to see them in the wild, with the added possibility of seeing the Victoria’s Riflebird, an endemic bird of paradise. It can be seen only in this part of tropical North Queensland.

After stopping in Kuranda for a stroll around the shops we missed on our previous visit, we drove up Black Mountain Road keeping an eye out for the sign to Cassowary House. Good thing we did, as the sign is small and almost overgrown with the exuberant tropical vines that grow everywhere. Our cabin was rustic and intriguing, cobbled together of windows and doors from other structures. (Both doors have glass central panels marked “Telephone.”) The terrace at the rear looks over the woods. We’ve learned enough about Australia to pay attention to advice like, “No dinner is served.” I checked with our host, Sue, and she advised us that the fish & chips shop in Kuranda was one of the few restaurant options nearby. Our cabin was equipped with hotplate, microwave, and toaster oven, enough to organize a simple dinner so we chose to shop for supplies in Kuranda. When we arrived at Cassowary House, we could do some birdwatching, watch the sun set into the forest and not have to go out. 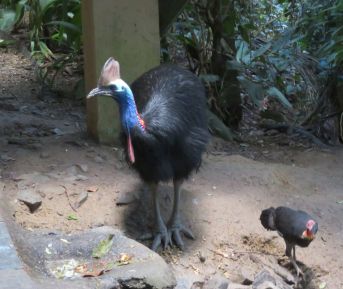 As we waited to check in, we heard rustling in the bushes, and out stepped a cassowary.

We all froze, then reached for cameras, but by then it had stepped back into the forest, and a baby cassowary took its place! Though both vanished back into the leaves, we saw them both again the next day. The female cassowary is Gertie, and she regularly stops by Cassowary House to snack on cornflakes. The baby is this year’s offspring.

Cassowary hatchlings are cared for by the male, and Gertie seemed faintly annoyed by being followed around by a juvenile. The young bird seemed content to wander the property following its mother, welcome or not.

After dark we heard the catbirds mewing louder than a box of kittens. Though we heard far more birds than we saw, the site was lovely, with trees over 60 ft tall trailing long vines, holding up basket ferns and epiphytes. In the morning, we ate breakfast overlooking the feeding cassowaries and the local brush turkeys (protected but unwanted), while on our level, a black butcherbird, and Victoria’s riflebirds stopped by to gulp down tiny cubes of cheese perched on the railing.

The brownish female riflebirds arrived first along with a young male who began doing the riflebird’s courting display, swirling one wing out, then the other, like a bird trying to do “The Swim.”

It was promptly shooed away by the females, but shortly afterward, a male riflebird swooped in. They are dark blue/black, but their tail and a line of feathers around the neck flash bright metallic turquoise in the light. It was a treat to see them. We don’t usually go out of our way to see endemic species though we did enjoy our foray into chasing unusual birds. The Cornell Lab of Ornithology has a great video of a riflebird doing his dance.

(The photos of female and juvenile riflebirds are from the internet.)