We said farewell to Sydney at the end of the month after a very good visit. The city is justly famous for its opera house. The surroundings are gorgeous, there are cafes to stop at for a drink or a meal, and the view over the Harbor Bridge is unmatched. Once you’ve seen that iconic spot, however, the tourist part of the city is not as well known. Beyond the opera house and the adjacent Botanical Gardens there are remnants of the old city hidden in many places. These require a bit of searching. Sydney’s “Big Dig” preserves archaeological excavations in the area of downtown called The Rocks, where there are renovated old homes and warehouses, even a funnel-like alley called “The Suez Canal.”

From the coast around Botany Bay and into Sydney Harbor, there are miles and miles of riverbank, bays, points, ocean beaches, and wonderful salt water pools. You can spend weeks exploring the coast and every walk is rewarding. We went beach combing and found star-shaped shells, cowries, and beach glass below strange rock formations carved by the waves and wind. Sydney may be a hub of industry and culture, but nature takes the spotlight, and for that reason, living in Sydney wouldn’t be my choice. Too much traffic into the center of town and houses tightly packed right to the edge of the beach. 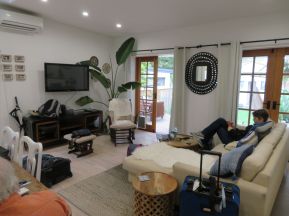 Airbnb: We had lots of places to choose from and were very happy with our location in Eastgardens, a five minute drive from Maroubra Beach and Mahon pool, yet on a bus line into the city (but see my Public transportation comments). As in Melbourne, our rental was half a house, yet we heard only a few footsteps from our neighbors through the wall. We were surprised to find a tiny studio apartment in our backyard shared the parking, entryway, and yard–this wasn’t mentioned in the Airbnb description. Fortunately, the tenants proved to be charming new friends.

Art and Culture: Our favorite museums were the National Gallery of New South Wales and the National Library collection of art. We also enjoyed the Museum of Contemporary Art, including its collection of aboriginal art. We thought about going to Canberra to see the museums but we didn’t. Our opera at the Sydney Opera House was excellent, we sat in the last row of the orchestra for about $100 per person. Expensive, but it was a rare treat.

Cost of Living: Sydney has become one of the world’s more expensive cities.  A wide selection of goods is available, with few bargains. Housing is expensive, transport is relatively expensive, food is a bit higher than average, restaurants are expensive….you get the idea.

National Parks: Sydney has large national parks to the North, West, and South of the central city. Entry fees are determined by the regional government, and can differ from place to place. We found that purchasing a parks pass would cost more than paying for each visit, $8-$12 per day depending on the park.  We spent a day hiking near Wattamolla Beach in Royal National Park, another day visiting the Jibbon Aboriginal rock art site near Bundeena, part of the same park.

We went to the extreme southern point of Botany Bay in Kamay Botany Bay National Park, beyond the marker to where Captain Cook came ashore. We also drove out to Cape Solander.

North of Sydney Harbor, we visited Lane Cove National Park, where we did some bird watching and strolled the pathways along the water. Each visit required a park fee. There is parking, along with toilets, picnic areas, and some visitor information.

Phone Service: We continued to use our Optus SIM cards. For $30 per month we get more data than we can use as well as phone calls and messages. This works well for us.

Public transportation: Sydney has a unified public transport system that includes trains, ferries, and buses. A new tram system is about to start up in 2019, though it was not open during our visit. Travelers need an Opal card, which is free, You add money (a top-up), then you hold your card to a scanner when you board and depart the vehicle to deduct the fare. Buses do not sell single ride tickets. The full price is $4.71 per ride. Occasionally the fare is less but it is impossible to find out what a fare will be in advance unless it is the full fare. Because the minimum recharge is $10, you can be short a dollar or two for your last fare before leaving, but you can’t pay cash, and you can’t use your card unless you put $10 on it. Lots of money gets left on cards that way. Train and ferry prices vary. Riding a ferry can be an alternative to a harbor cruise, though we didn’t get around to it. People recommend taking the ferry from downtown (Circular Quay) to Manly. You see the sights without the high price or the commentary.

The buses were frustrating, they didn’t run on time and followed neither the printed schedule posted at the bus stop nor the Opal app run by the transport authorities. All you know is that the bus runs at least twice an hour. Next time I might skip public transport and use Uber to go downtown.

Sydney Tower: We didn’t intend to have dinner in the tower, in fact I thought it didn’t have a restaurant, but when we were marooned in town on our day of departure due to train breakdown (see my post on the Indian Pacific), we were taken there for an early dinner. The view is spectacular as the restaurant revolves over the center of the city, and the buffet was fine. I recommend it for the great views.

The sunset over Sydney Harbor with North Head in the distance. It’s a beautiful place.