We’ve been following summer around the world for five years, and I enjoy summer in every locality. Now that we’ve been in Melbourne for a week, I’m getting a sense of what summer is like right here. Our neighborhood is Ellwood, a close-in suburb of Melbourne. For Chicagoans, it’s like living in Evanston near the lake. I can walk to the beach in ten minutes, while ten minutes the other direction takes me to the tram or the train into the city center.

The city influence means there is a good bakery just blocks away despite our street being a leafy residential zone. The cafe right at the beach does good business all day long. I see all kinds of people there, moms and small children, older couples having lunch, individuals reading on their phones. There are always at least a few people on the beach, and on the hot, hot Saturday there must have been 300 people there.

I take different routes to and from the beach, watching the construction of new houses and renovations of older ones. There seems to be a tendency to build ever higher walls along the street.

I see the upper fringe of detail on a house and am unable to take a photo that does it justice because of a brick or concrete wall that covers most of the facade. Duplexes are quite common here, and halves of houses are bought and sold independently. 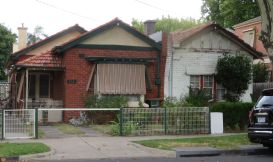 With high walls proliferating, the best picture I have of a traditional duplex shows that sometimes one owner is more diligent at upkeep than another. Many neighborhoods of Melbourne hold lovely old houses in a variety of styles.

There’s a “Southwest style” house, others with elaborate  exterior trim or fencing, and even a few Art Deco. 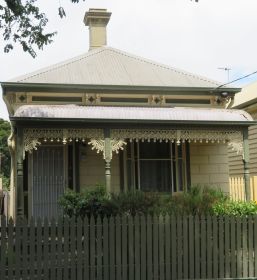 Many older houses have lovely beveled glass windows. Our front door has some. I saw a creative newspaper box on my walk, too. 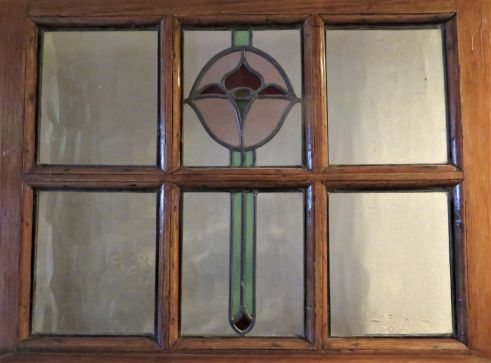 Occasionally, though, duplex life produces some pretty uncomfortable architecture. The most extreme I’ve seen is a traditional house on one side, single story with a low peaked roof, with a two-story contemporary on the other half. Possibly the only original part of the newer half is the connecting wall between them. The two houses below really share a center wall. 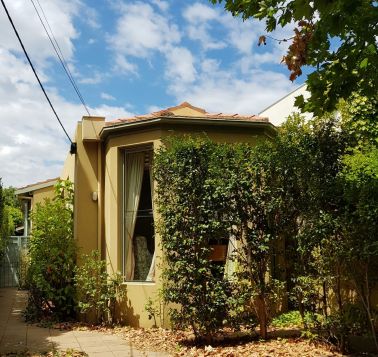 There are lots of apartment buildings throughout Ellwood, but most are no more than two stories tall and fit into the neighborhood easily. In this way the area holds enough population to support urban services like public transportation. Melbourne’s system is easy to use, one card for bus, tram, and train. 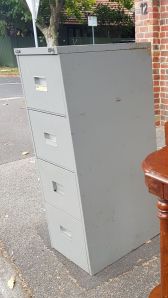 My walk generated a moment of nostalgia when I saw a four-drawer file cabinet on the sidewalk with a couple of other items marked “free.” About 40 years ago, Jonathan rescued a similar cabinet from the sidewalk in Manhattan. It moved around the country with him. I met up with it when we got married and lived in Denver, and from there we went to Santa Fe and Chicago. We finally donated our file cabinet to Goodwill when we downsized. I hope the cabinet on the sidewalk in Ellwood gets as good a run as ours did.

One of life’s pleasures is feeling like you belong somewhere and however fleeting, I feel this way about Ellwood. I could live here happily, even though we’ll be moving on at the end of the month. 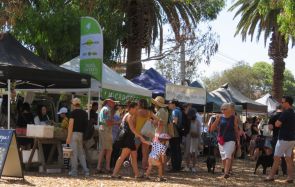 Something about the settled neighborhood, the weekly market at the school at the end of the block, access to other areas of the city, and friendly neighbors makes it feel like it could realistically be home. It’s a very warm feeling that I enjoy every day.