Harry Clarke isn’t a name well known outside the world of stained glass, though he should be. An Irish artist who died at age 42 (in 1931), at the time of his death he had completed 40 commissions, including one in Dingle for the convent of the Presentation Sisters. In the 1990s, the order decided to reduce its presence in the region and The Diseart Center of Irish Spirituality and Culture formed to take over the space, including the chapel with 12 individualistic, dramatic stained glass windows of Bible scenes. They are very much worth visiting.

Clarke lived during a period of artistic upheaval. After the Pre-Raphaelites, but during the Celtic revival in Ireland, Art Nouveau in France, Arts & Crafts in the UK, Art Deco, too. He used elements of many styles in his work. Clarke also illustrated works of Edgar Allen Poe and Hans Christian Andersen. Some of his drawings resemble the work of Aubrey Beardsley.

One of the features of the windows is the fine-line painting on many of the individual pieces of glass. There are details that make some panels seem like a game of Hidden Pictures. I don’t know whether Clarke ever created any non-religious images, but I would certainly be interested to know what he might have created. He created 9 stained glass panels illustrating a poem by Synge, “Queens”. Originally created for a library in a Dublin area estate, the panels were sold to a private collector in 1996 and their location is no longer known. The price was a record for Harry Clarke’s work. Since most is located in religious structures, it is rarely for sale.

Check the link below to see whether there is any of his work near you. 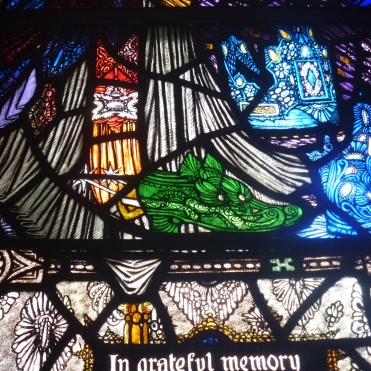 The Diseart Center, where the stained glass windows you see here are located, offers classes in Irish culture, language and themes related to spirituality.