Twice a week around 9 am, we go to the local market complete with hanging raw meat, squelching liquid underfoot in the aisle of fish, and the scent of recently killed chickens. 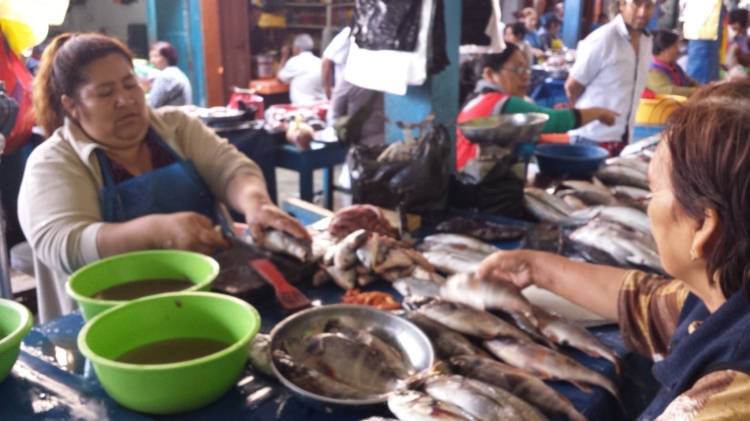 That may be the cost of fresh food, and it doesn’t bother me too much. When we buy fish, Jonathan lifts the gills to check for the slime that indicates a lack of freshness. My neighbor says that if you are going to buy corvina you need only poke it in the side because the flesh depresses very readily if it is at all stale.

Sometimes, the fish are still alive, many are still in rigor, so you know that the fish is fresh. You can make sushi of anything we buy. Mahi-mahi appears occasionally and is not very well known, so it is inexpensive. We snap it up. The down side of this wonderful fresh fish is the large poster that hangs in the fish aisle listing the legal size of different fish species. You can see how much smaller most of the fish are than they are supposed to be.

In the meat aisle, sides of beef and pork hang in the open, as do smaller cuts. There is a communal refrigerator that lets butchers keep their extra carcasses cold, so it’s not as scary as it might sound (raw meat in hot weather). Often the animals still have a bit of tail attached, to show that you are buying the real thing and that no one is selling you goat for lamb.

From fish to meat to vegetables and fruits, we take our grocery list and finish up the shopping. Fruit is last because we have to lug the four or five kilos of juice oranges back to the car. We drink a glass of fresh-squeezed orange juice every morning–I think it’s worth the haul. Sometimes we stop at a stand that sells black and green olives, dried fruit, nuts, cheese and bacon. There are several stands of this type, but we have gotten to know the woman who runs it, Elena, and her daughter (the husband was thrown out for cheating). Elena is fascinated by what it would be like to visit the US. She asks about traveling to the US and was enchanted to meet our daughters when they visited.

This woman’s hat (right) shows that she is originally from the highlands and still identifies herself as a highlander. Her dress is local, no multiple colored petticoats. Just the hat.

The man on the left (below) is selling hard boiled quail eggs. You can get them peeled or in the shell. The clown is a professional beggar. The guy on the right in Amazonian garb and python is selling–what else? Snake Oil! 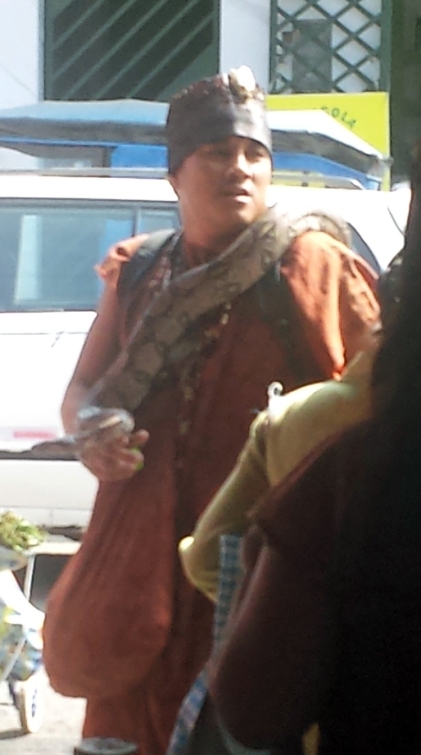 Six years ago, we would have gone on to a dry goods store for the rest of our shopping, but a Metro supermarket has opened in Barranca. Now we go to the Metro and finish up our list. The advantage of a supermarket is being able to select your own items. The selection is not tremendous, but we are accustomed to this kind of shopping. In the dry goods store you stand at the front desk and tell them what you want. It is produced from somewhere in the depths of a very long, narrow storefront. Metro also has a liquor section, and takes our credit card. Outside Lima, only the supermarkets, a few gas stations and some restaurants accept credit cards.

Any other errands on the list come after the market, like stopping at the post office or getting paper goods at the Libreria Universo. This is why we limit shopping to twice a week. You could spend hours every day navigating the same route to get a container of milk or a roll of tape.

There are only a few products that we buy in Lima, like Uruguayan parmesan–delicious! available!, a few other exotic cheeses (blue, brie), peanut butter (not Skippy, real peanut butter). We eat very well.

On to a less terrific element of our life, local culture. The beach is the focus of activity, but what else goes on? The short answer is not very much. You have to make your own entertainment. There’s a movie theater now, but all the films are dubbed in Spanish. That makes perfect sense but not for me. There are archaeological sites to visit, many of which we’ve worked at, so there’s not much new there. There are some local festivals. Last weekend I saw part of the parade at the end of Barranca Tourism Week.

I saw Miss Regional Tourism, and Miss Argos, and Miss Pre Barranca, along with a big banner and some local dance groups. It was fun that it was right on our street. For our periodic shot of “culture”, we go to Lima to see the Met Opera in HD at one of the big movie theaters. It’s great, it’s the Met. The four+ hour drive is a pretty big disincentive to any cultural offering in Lima though there are a lot of goings-on. I keep clippings about exhibitions or events we might go to, but we try not to visit Lima more than once a month. In the summer (now) it is very hot and very humid. Between that and the traffic, staying home and trolling Netflix wins out most of the time. There are things like archaeology lecture series that might be a way for us to connect with colleagues, but these take place during the academic year, mid-March to December, when we are away.

Last but not least are discos. This is a beach community and lots of businesses operate December-March, including several dance places that I will lump together as discos.

They pump music across the neighborhood until midnight or so on weekends. The thumping beat is not very interesting and the volume is loud. On Sundays, discos are allowed to throw parties from 2-10 pm. I give them credit for closing on time, but it’s a constant Boomba-Boomba Boomba.

In fact, the most annoying party of the year was not at a disco but at a hotel up on the hillside where the reception went on until 5 am. THAT was bad, but what happened? Everyone shrugged. The neighbors band together and petition the city to limit and/or close the discos about every other year. The city fathers agree to study the matter…..

Entertainment is definitely what you make it.