“Let’s not rush into things,” is a phrase that people on the beach can really get behind. Today is Dec. 15, ten days until Christmas, one of the biggest holidays of the year and source of a lot of annual income along the shore. There’s been a surge of efforts to fix the beach up for the season, but just in the past few days.

DISCOS are the most resistant to improvement. The Rumba (above left) has added a ramada, while at Zunka, the facade was torn off just this morning. We’ll see what they put up. 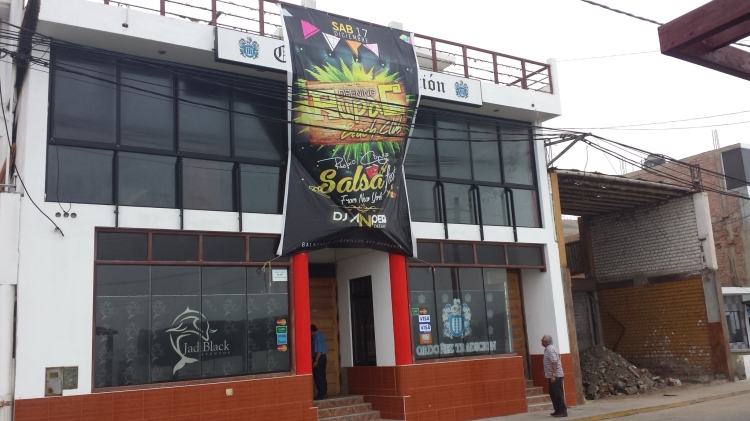 The restaurant bar owned by the Ordonez family got a facelift a year ago and it looks like they are re-opening this year as a nightclub. They have been closed since we arrived in early November, and the banner announces the Rupac Beach Club opening Dec. 17 with Rubia Conga Salsafest (from New York). In preparation, the windows have been cleaned. I guess they’re ready.

Hotels often receive a paint job during the year, but (below right) the hotel-formerly-known-as-the Daso Inn has sanded off the old logo. We’re holding our breath to see the new name. On the left, Barranca Suites, completed last spring, is already adding another section. Will it be ready for Christmas?–Maybe Valentine’s Day.

There is some new construction. We are not sure of the purpose for either site, and the guys working construction are cagey. The structure on the left may be a restaurant. 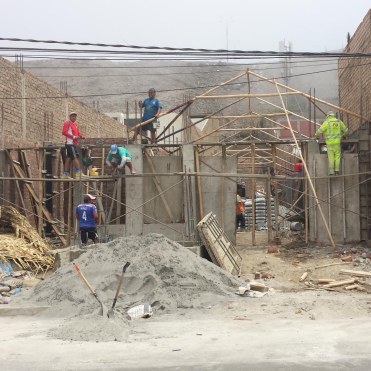 Apartments? Over the entrance to a praking lot?

The men working in front of this abandoned house (below) are putting up an ice cream stand–cremoladas, actually, a chilly fruit drink. 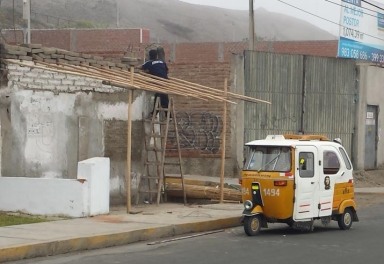 On the house below, the third floor is being sanded before tile is added to the facade. I think they got tired of doing the annual paint job. I guess it’s easier to wash the facade each year instead.

The bus shelters (there is no bus system) are getting a new coat of paint. The new paint job on the right is for Guaraná, a brand of soda. It’s the first time the sponsor of the paint along the boardwalk hasn’t been for a beer company. Unless there’s a corporate sponsor, the seafront installations don’t get repainted. 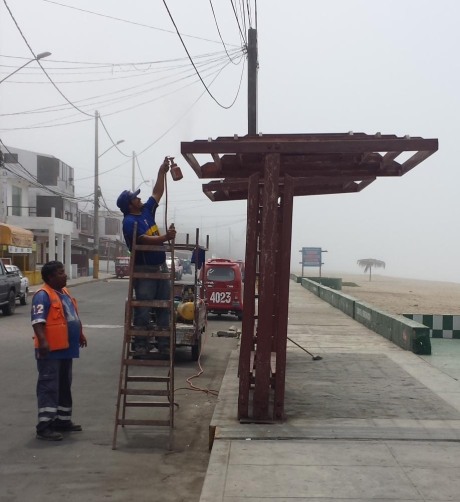 At our end of the beach there was no sponsor this year, so the neighbors got together and bought paint. The city agreed to provide a painter for three days. It may not look like much, but it is a lot nicer than scaly beer ads.

Hardest working part of the beach community are the trash cans:

Trash is collected every day. I keep threatening to put up a sign on the wall outside our house:

“The ocean is not soup. Do not put food in it!” The remains of limes, onions, the orange chili peppers called aji amarillo, and tangerine peels are among the most common of beach trash, right after ice cream papers.

Last but not least, the city touted the way our tax dollars were used this year to improve the beach environment. I am not happy with the choices.

First, we have a new “security center” that is manned occasionally by one civilian who cannot see out the window because it is so hot inside they have to paper the glass over. Anyone on the beach could have told them that at the start of construction.

Second, the city has put up scaffolding to repair and restore the giant mis-proportioned statue of Christ the Redeemer that was put up by a former mayor in about 1999, just before we arrived. Work to create the base of the statue utterly destroyed an archaeological site. The mayor’s comment, “There are lots of sites.” Supposedly, people visit Barranca and its beach as part of a visit to the statue. Maybe they do.

2 thoughts on “Getting ready for the season”