Every town in Scotland has a summer festival or agricultural show, meaning that on any given weekend you are within an hour’s drive of at least two such events. We had the Dalbeattie Civic Day on Saturday, culmination of a week-long series of events. 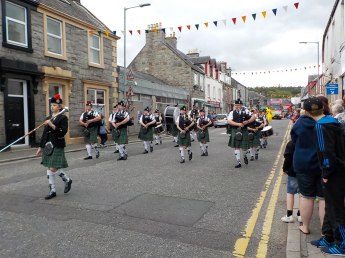 The parade started at 1 pm, led by a pipe band.

followed by activities and entertainment in the park, finishing with fireworks at 10:30 pm. I watched them from the back yard, since by 10:30 I was long past celebrating. 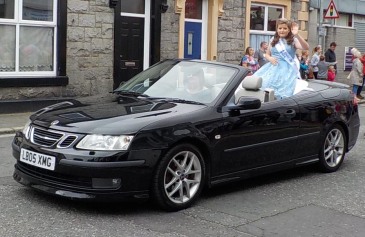 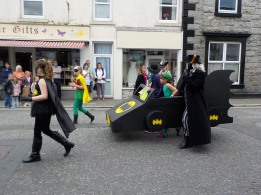 Batman and the batmobile.

On Sunday, there were sheep races in Moffat, highly recommended by a woman we met at a farmer’s market. Moffat’s advantage is that the main street consists of two parallel streets on either side of a narrow garden strip. One side can be cordoned off without paralyzing the town. Sheep race from down one block. Viewers can bet on the sheep and the money goes to a different local charity for each of the six races.

The event opens with jugglers and people dressed as sheep.

How can you tell which sheep is which? Each one has a loony saddle tied around its middle, complete with rag doll rider and a big number. The program has the “names” and “breeding” of the entrants. 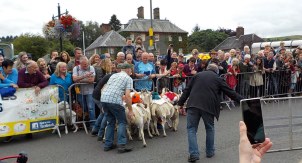 Distracted part way along the course

During the first race, one sheep got distracted half way down the course, but being sheep, all the others followed it. They had to be shooed to the end of the route by the brigade of helpers.

When you get a look at the racers, you realize that the sheep absolutely hate this. They try to get back in the pen before the race. A sheepdog gets the group started with the aid of three people shouting and waving their arms. When the despairing sheep realize they can’t get back in the pen, they scurry down to the other end of the course where there is another pen, which they rush into with great enthusiasm. We bet on three races and lost on all counts, but it was a very funny event. Afterward, we debated whether sheep ever die from fright during the races. 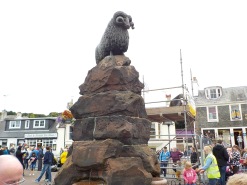 The town of Moffat has great pride when it comes to sheep. They have a bronze sheep rather than a famous man in the center of town.

The Shepherd and the Lass.

As part of the annual gala, they select representatives for the year, “The Shepherd and the Lass.” We met this year’s couple at the races.

Moffat is a pretty town, too, very accustomed to tourists. The town center is full of hotels, coffee houses, tea rooms, pubs and restaurants. We wondered where the people who live here actually shop. I assume there is a shopping center somewhere out by the highway. It was another great day.