Two days of sunny weather let us take advantage of the natural world in Edinburgh, the Royal Botanical Garden, and the Edinburgh zoo. Both have their high points. The Botanical Garden is very large and has many different gardens, though I misread Scottish Heath Garden as Scottish Heather Garden, and was mildly disappointed until I figured that out. The flowers were all in bloom, though a grounds keeper told us he thinks it is at its best in May when the rhododendrons are blooming.

There were trees with interesting shapes. 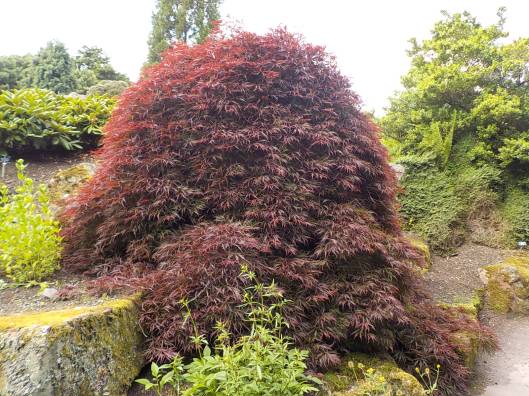 Sculpture and artwork is included in a number of places. 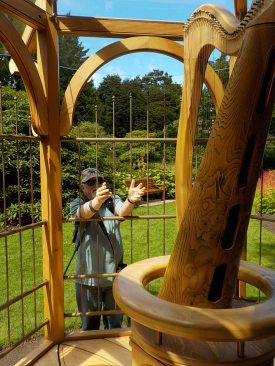 Jonathan wanted to play the aeolian harp, but he couldn’t quite reach the strings.

We saw a wild animal in the bushes, possibly stalking a fat pigeon.

Despite the fact that this looks like a panther, it is a cat at the botanical gardens.

We thoroughly enjoyed our stroll around the garden.

On we went to the Edinburgh Zoo.

There were many fun parts of our zoo visit. The movie celebrities were entertaining.

The Edinburgh Zoo makes it clear that it is heavily involved in research and conservation. It participates in projects in Scotland and all over the world. It also holds animals that are not commonly seen. That way it doesn’t directly compete with the very largest zoos, though they do have a giant panda. We dutifully went to look, but the female is off display because of breeding, and the male had just lumbered out of sight when we arrived. I guess it’s pandacam for us.

We did see the bald ibises that we were unable to see in Morocco, their largest remaining breeding area. They aren’t lovely, but there is a flock in Edinburgh and we could see their peculiar bald heads. 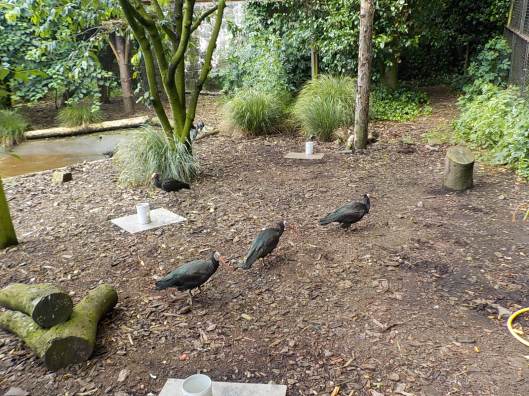 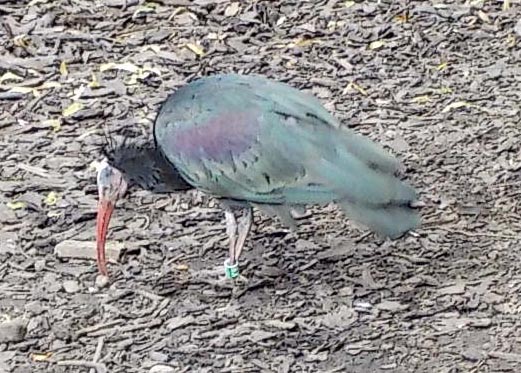 Another species we saw in Morocco has adapted well to Edinburgh, the Barbary macaque. The “wild” macaques (unconfined might be more accurate) we saw begging by the road in Morocco were obese from eating food provided by visitors.

The group in the Edinburgh zoo was livelier. This young macaque was chewing his way through a rope end. The zoo also participates in a chimpanzee project in Uganda. I even saw a Callimico monkey, from Bolivia, where my former colleague Leila Porter studies them.

There were a pair of dik-diks, each the size of a fawn, and a pudu, a Chilean species that I had never heard of before.

A local rarity is the Scottish wild cat. This animal has a tough time keeping its dignity, because it looks exactly like a tabby cat unless you look VERY very closely. I even read a conservation article that questions how many resources should be invested in saving this endangered species if it isn’t certain there are any left that aren’t part house cat.

I have to admit, the differences are slight enough that I think some DNA testing is in order.

The penguins are always fun and Edinburgh has a large colony of gentoo, rockhopper and King penguins. The penguins go for a walk every day led by keepers, but (!),

The penguin parade is run on an entirely voluntary basis. It is the penguins choice to take part, we do not encourage them with food. Unfortunately this does mean that occasionally the parade is cancelled if they do not wish to go out.” (Edinburgh zoo web site) 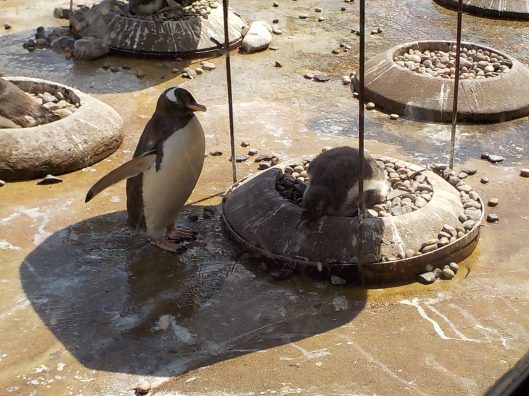 JH and his buddies

I also love all the birds. We saw the world’s largest pigeons, who strolled right out under visitors’ feet, a large stork, Chilean flamingos far from home, and scarlet ibis that you can see if you visit Trinidad (or northern South America).

The zoo property was purchased from a private owner in the early 20th century and the elaborate house is still present, right in the middle of the grounds. It’s now used as an event venue, “The Mansion.”

It is the kind of house that a child looks at and says, “I want to live in that house in the zoo.” I agree.

1 thought on “Plants and Animals, the Royal Botanical Garden and the Edinburgh Zoo”