Getting to Edinburgh Castle was an adventure all its own, because we had to find a route that was short enough that Jonathan’s ankle would still function after we arrived.  We pored over the street map and ended up taking a bus to the center and walking up “the mound” to the castle. It was a lot shorter than on my previous visit with Paula and Emily where we walked to North Bridge and up the Royal Mile. 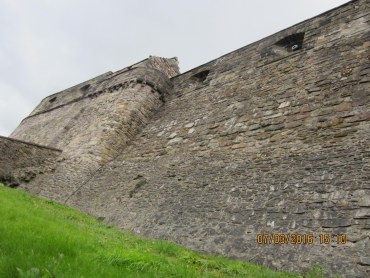 Imposing from every angle.

The portcullis is still the entrance.

The parade ground after the portcullis is marred a bit during the summer by the huge metal stands that engulf the space, setup for the Edinburgh Tattoo military show that takes place every night in August. There is still plenty of pageantry for those of us who won’t be staying until then. 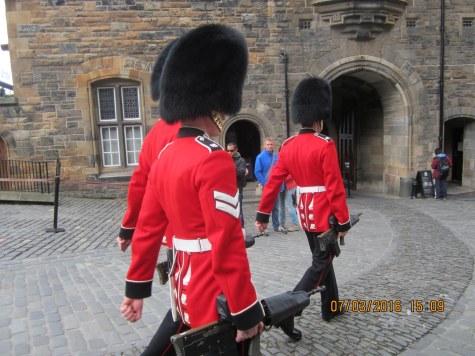 The guards change with a bit of the pomp you see at Buckingham palace. They also rotate services. Today was Beefeaters. Another day were men in green with flat caps.

The crown jewels of Scotland were impressive, though the Stone of Scone, displayed with them is a puzzling display of patriotism. The tale goes that ancient kings of Scotland were crowned while standing on the stone, a small featureless block that now has a couple of iron rings set in it. When Scotland signed the treaty that made it part of England, the block was carried off to Westminster in 1296 and stored in a drawer below the seat of a custom-made throne designed by Edward I. It stayed there until 1950, more than 650 years later (!), when it was stolen by Scottish students. Despite a wide search, the stone was not recovered by the police, but was returned early in 1951 after only four months in hiding. Scottish nationalism built up over the years since then and in 1996, the stone was returned to Scotland. That doesn’t seem to have quelled nationalism, and Scotland may again one day be an independent state. The Stone of Scone rests with the crown jewels while they wait.