Our friends Joyce and Jean-Marie joined us at the riad and brought their car, so we took advantage to do some exploring outside the medina. The book “Fez from Bab to Bab” by Hammad Berrada, is a classic guide to the medina and it starts by suggesting a driving tour around the ancient city walls. The French “Guide Bleu” has a similar tour. We started by walking to the parking lot, passing the traditional medina transport:

There are two large fortresses on either side of Fez. The Borj Sud provides a view over the medina and away to the south. 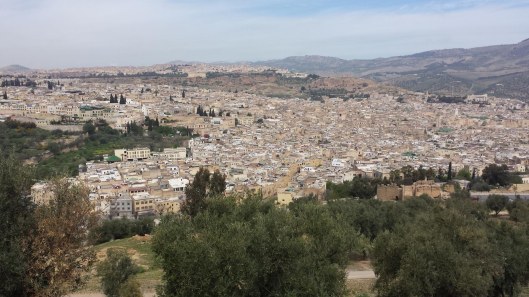 Kestrels and jackdaws live in the many nooks and crannies in the Borj Sud. They zip in and out while you are having your photo op.

Borj Nord is on the other side of the city, past several other gates and old bridges. There is a military museum there, but as has been our luck in Fez, it was closed. From the Borj Nord you can see how far modern Fez spreads from the medina. The new city or Ville Nouvelle, (not to be confused with the new city of the 1400s Fez Jdid), is not particularly close to the Medina. It’s a separate city, not surrounding the old walled medina that is in the foreground below. 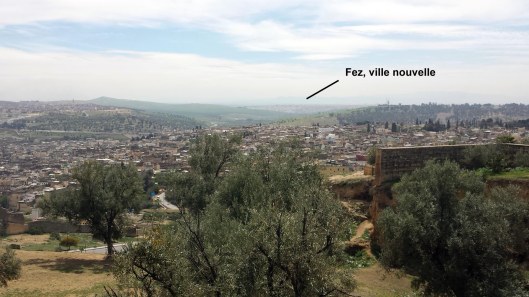 We intended to savor the view of the city from the Palais Jamai, an elegant hotel situated on the northern edge of the Fez medina, but it is closed for renovation. We continued along the walls to Bab Boujlud, parked and walked in to the Cafe Clock. The “clock” is a puzzle, a series of brackets supporting brass bowls that caught a brass ball signaling the hour. Behind the facade, water draining from a tank at a constant rate was used to determine the passage of time. However, none of this has worked since the death of the clockmaker in about 1400. The bowls were removed in 2004 for restoration, which has not taken place.

The 13 lower brackets hold brass bowls in photos from the early 20th century. Today the cafe is as much a landmark as the “clock” itself.

The cafe has a very nice roof terrace with lots of shaded tables. As long as you can climb the four flights of stairs to get there, it is lovely. After lunch we made our way back to the Bab Jdid parking and the delightfully cheerful Mohammed, chief parking attendant.