We have been to Parc Guell twice, once to see the section outside the pay zone and once with a ticket. There is more than enough for both visits. Inside the ticketed area is the best known feature of the park, a long sinuous tiled bench that runs around the perimeter of a plaza that overlooks all of Barcelona.

The park is high on a hill over Barcelona, chosen for the healthful qualities of the area for a residential development sponsored by Gaudi’s patron, Eusebi Guell. Two small structures are also part of the gated park. The gift shop (L-below) was a reception area for the failed residential development that was to surround the park. The other was a park guard’s house–I hope they enjoyed it. Today there are no furnishings, just the space and audio-visuals, but it would be a magical place to live.

We also visited the Gaudi House museum. Though it was originally part of the park, it is now operated by the Sagrada Familia organization (can you say ‘turf’ and ‘income’ boys and girls?).

The passages and walkways are all sculptural and wonderful. There is a space called the hypostyle hall, full of columns that lean in different directions. Its tiled ceiling is ornamented with medallions of sea creatures. 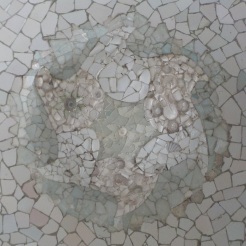 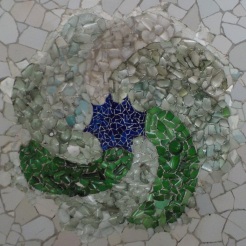 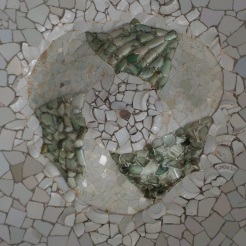 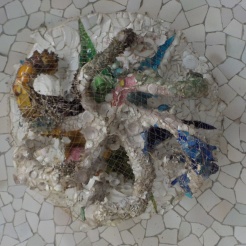 Not that there are any columns that don’t lean. 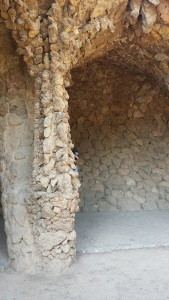 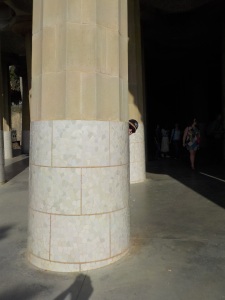 We had an interesting chat with the guard shooing people away from the iconic symbol of the park: the iguana (below). You can buy a copy of it as a fridge magnet or a keychain, snowglobe, tshirt, potholder…..anywhere in Barcelona. Therefore, people would like a photo of themselves hugging it or sitting on it or merely patting it on the hand/paw. The guard’s job is to ask people not to do that, except that most visitors either don’t pay any attention or don’t understand him. He was very exasperated as he flapped his hand at tens of people as we stood nearby. “Oh! You understand Spanish. Hardly anyone does. Do you know what my boss will say if he comes by and sees people sitting on this? I’ll be in for it. Up! Up!” He flaps at more visitors as a new crowd flows down the steps and starts to sit on the lovely lizard and wave their selfie sticks. 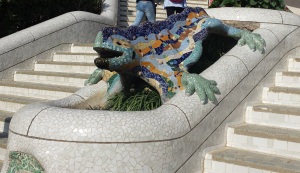 Another pillar supporting a well-meaning but uninformed visitor.

Our entry to the Gaudi House Museum was free (thank you ICOM).