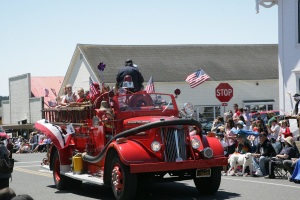 The July 4th parade in Mendocino was truly eclectic. There were fire trucks from many jurisdictions in Mendocino county. 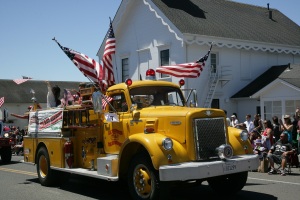 We missed the presence of a high school marching band, but there was live music provided by people who looked to be about our age. 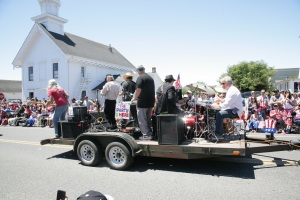 The California state parks were represented.

There were also political floats, again all manned by um, “mature” persons.

The “No Hack and Squirt” float refers to a logging practice where “lower value” species are killed by hacking into the bark and spraying a dose of herbicide. The problem with this approach is that the herbicide can spread to other “desirable” trees relatively easily, if there is rain, if the cuts in the bark are not properly made. The forest industry views hack and squirt as a highly effective management method. Local people view hack and squirt as the poisoning of hundreds of acres of trees for no reason.

This float consisted of a single table. It was the display of a local custom furniture maker.

This seems to be a parody of old time logging, with a female lumberjack, and a goat hauling a small load of miniature redwood logs. 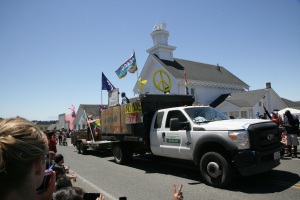 Parents for Peace had banners with every current social problem–they’re tackling all of them.

Last but not least, this bird walked down the parade route, stopping every 30 feet or so to deposit a shaving cream “poop”. There was also a float of a “llama” that “peed” on the crowd, and a banana slug, but it had run out of slime. Who organized this parade, the 5th grade boys?

We did go on to see the fireworks shot over the mouth of the Noyo River. The pizza was good (Piaci’s in Ft. Bragg) but the fog was pretty thick. The fireworks showed through, they just had an added aura, courtesy of the fog.