Because it was there. Now that you know why we went to Colonia, Uruguay for the day, I can say that Colonia is a fine day trip if you don’t want to do very much—and we didn’t. We strolled around the very small surviving remnants of the settlement founded in 1680. 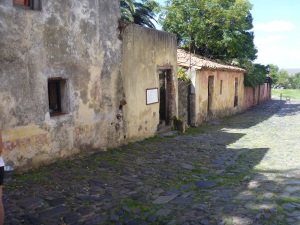 That is very old, I agree, but it is a stretch for a day trip. On the other hand, for the purpose of saying, “I’ve been to Uruguay”, it’s just right. It might have been more fun to visit Punta del Este and look for movie stars, but that would involve several days, and I probably wouldn’t recognize any of them, anyway. For architecture lovers, there are some nicely restored houses in Colonia. 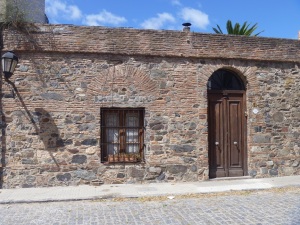 The first unusual thing about taking a ferry from Buenos Aires to Colonia is the fact that you are out of sight of land at one point, And You are Still in the Mouth of A River! (The Parana). Just as weird, and making you feel that you might be in a science fiction story under the light of some strange sun, is the fact that The Water is Very Brown! 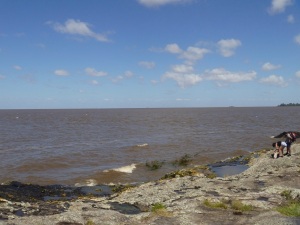 From a distance it looks like an extensive farm field, then you notice the whitecaps. It is very strange. Looking into the situation further is not very encouraging. Argentina as a whole treats about 10% of their sewage, thus, the Rio Parana is probably as bad as it looks. We did not go for a swim.
UNEP report on sewage treatment in Argentina

We strolled, ate lunch, strolled some more, including the archaeological site of the early Plaza de Armas and house of the governor, where we saw a cistern that looks just like the one in our back yard in Illinois. 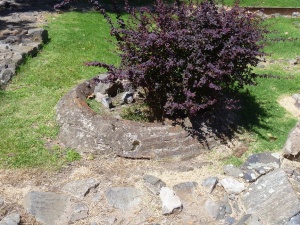 We also saw more birds. More monk parakeets, confirmed the grassland yellow finch, and the masked gnatcatcher that we also saw at the Reserva Ecologica. Here are more photos from my favorite website for Argentine birds: 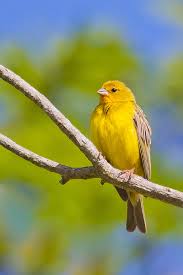 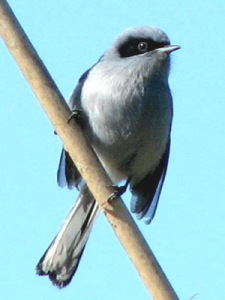 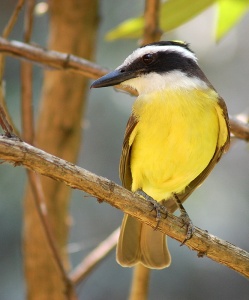 Details: Sunny, no clouds, high in the low 80s F. A perfect day.

Day trips to Colonia, Uruguay are possible, though you may not be able to buy a ticket at the last minute. We bought round-trip tickets on Tuesday for a Friday visit and were not able to get the lowest price. On the way to Colonia, the ferry was full, on the way back it was not. Our round trip tickets cost about $220 for both of us. The ferries seem to want to profit as much as possible, so they require payment in dollars or credit card by foreigners. That means that the official exchange rate of AR pesos 8.5=US$1 must be paid and not the unofficial rate of 12.9 AR pesos=US$1 that can be paid with Argentine pesos cash.

We were told to print our own boarding passes or be charged US$5 per boarding pass. We were also told to be at the ferry landing at 7:15 am for an 8:15 am departure. The location of the ferry is not well described, but our taxi driver knew where to go. We went on Colonia Express, and our trip was scheduled to take 70 minutes, but took more like 90 min. On the ferry, no one mentions a time change–Uruguay is an hour earlier than Argentina at this time of year. Had Jonathan not struck up a conversation with some Americans at the cafe where we had a coffee, we might have shown up at the dock after our ferry had departed. That’s another thing, the ferry leaves when all the scheduled passengers are on board. Going and coming we left more than 5 minutes ahead of schedule. Who’s ever heard of such a thing? 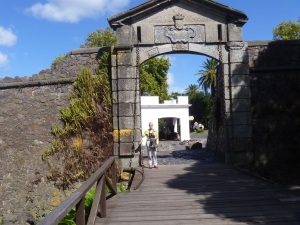 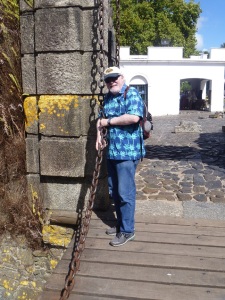 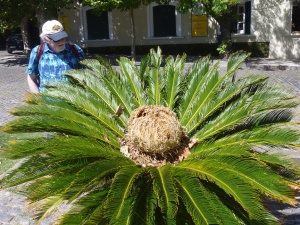 Everything in Colonia costs more than anything in Buenos Aires. Our lunch was adequate but not exceptional, the same with coffee. I was tempted by the reproduction majolica objects (like a coffee cup), but they were not very good quality and were pretty expensive for what you get (Majolica coffee cup $US 17). There were interesting paintings by an Argentine/Uruguayan artist Alejandra Miranda in one store that had more unusual items. Her work reminded us of the paintings of Eleanor Haas.

We were ready to return to Buenos Aires at 4:30 pm when we were due at the ferry terminal. The trip back was uneventful and the taxi line was not too long. We arrived back at our apartment at about 6:30 pm. Our host, Manuel, stopped by briefly to drop off his bike and we had a good chat.