We had a wonderful New Year’s Eve considering that at noon on Dec. 31 we had no idea what would happen. A couple of conversations later and a quick trip to the store we were set. (Jonathan shopped while I stood in the long line. Serendipity smiled, and he turned up just as I got to the head of the line.)

We strolled the beach in the afternoon. There are a lot of tents this year, pitched by people who want to celebrate on the beach.

Food trucks are getting into competition with traditional street-side vendors. 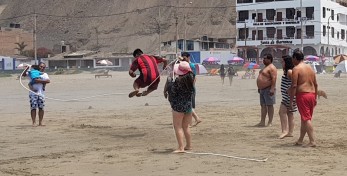 I was fascinated by a group jumping rope on the beach, especially since they were mostly men. I’m used to jump rope being for girls. At one point all three men managed to get in and get jumping. 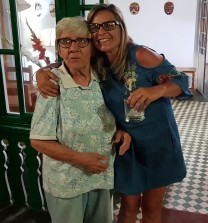 Teresa hates to have her picture taken. Leila doesn’t mind.

After harvesting some salad ingredients in the garden and a bit of cooking we were ready for guests.

We had a simple goal, make it to midnight. The  tradition in Peru is to start the evening at midnight, celebrating at home over a dinner at the start of the New Year, then going off to clubs or parties. Our group was willing to have dinner earlier, in hopes of making it to midnight.

We suggested guests arrive at 8 pm and we started with a range of beverages from homemade eggnog to wine and scotch. We were happy to chat and sip, with just a few peanuts to keep us going. There was a long discussion of how early was too early for dinner. Waiting until midnight was out of the question, but if we ate at nine, would we be asleep by 11? There was also an important rehash of the year’s news, politics and neighborhood gossip. That took us until almost ten, and we finally decided that the right moment had arrived. 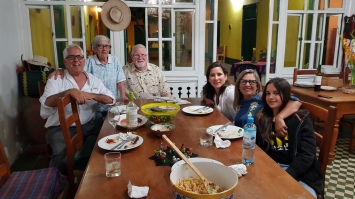 It was a delicious dinner, with steak, pasta salad and green salad. We enjoyed ourselves thoroughly, but even so the party unraveled after 11.

Jonathan and I decided to put chairs on the front porch and await the midnight fireworks that are a cherished custom in Peru. Who can sleep through an extended spate of fireworks? We decided we might as well see them. The fireworks were impressive considering that they are all privately purchased and set off. At one point, there were fireworks at three or four places along the beach and three sites above us in town. The displays went on for more than 15 minutes, a great end to the evening. 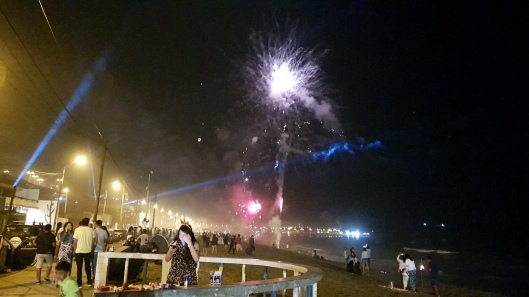 The view down the beach. 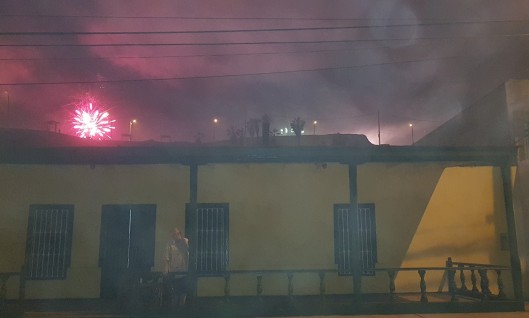 Smoke and fireworks over our house.

If this is any indication, it should be a good year.