One of our goals in visiting Australia was to see as many of the cockatoos as possible. We heard that in some places there were so many cockatoos in city parks that they became a pest. We wanted to see that many cockatoos. And we did. As we traveled around the country, we tried to find out where to see cockatoos, and when there were flocks of cockatoos in our neighborhood we sat and looked at them.

In Tasmania, our first stop in Australia, we found a flock of sulphur-crested cockatoos arrived in our neighborhood each evening just before sunset. They gathered in a tall tree, then shifted from tree to tree until finally settling in a speckled trail of birds across the hill.

There were fewer cockatoos in Melbourne, but they were loud, cackling from tall trees along the nearby canal, perching in tall trees on the grounds of a school after the students and staff left for the day. Sulphur-crested cockatoos tend to put up their bright yellow crest when they land on a branch. It makes them easy to identify.

You might not think a city as large as Sydney would be home to cockatoos, but we spotted yellow-tailed black cockatoos flying across the freeway, and tracked a big flock of them to a nearby golf course.

On our train ride across the country, we even saw Major Mitchell’s cockatoos, a pink cockatoo with a bright red and white crest. 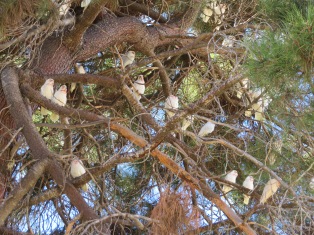 Perth was our Cockatoo bonanza, where we saw flocks of Corellas perched in the trees by the beach, with more on the ground.

Right in front of our house in Yanchep, a flock of about thirty galahs, the pink and gray cockatoo, visited a large tree every day. We would find them sitting in the branches or poking around on the ground every morning and evening.

Darwin is hot and humid, with many species of birds that are new to us. We got our

best look at red-tailed black cockatoos there, in the park that bordered our house. The pair sat in a tree eating large nuts as they watched us watching them.

When I talk about birds, I often use photos from the internet and indicate that. It’s tricky to photograph birds, and takes more patience and a longer lens than I possess. In the end, we saw most of the cockatoos. We missed the red-headed Gang-gang cockatoo of the far south, and the Palm cockatoo of the far north. We really did see a field of thousands (yep!) of Corellas, and places where people are careful not to put out food for cockatoos because of the damage they do whenever the food stops. We saw cockatoos picking in trash bins like crows, and chewing all the top branches off pine trees. We still like them.

At the same time, I’d never have one as a pet. Large tropical parrots and cockatoos are voracious chewers, quick to ruin wicker furniture, wood trim, and kitchen tools. These big birds are easily bored, and will destroy what the owner holds dearest as soon as they have a free minute. The only well-behaved pet cockatoo I’ve ever seen was with a man in an electric wheelchair in Palm Cove, outside Cairns. His bird would sit on our hand or shoulder and was trained to fly back to the shoulder of his owner when you pushed him gently. He was kept on a long tether so that he could fly from his owner to a “new friend” and back.

The bird, whose name I forget, was healthy, bright-eyed, and interested in passers-by. The key to this happy relationship was that his owner was always with him. I’d guess 90% of the time when the bird wasn’t sleeping it was on the wheelchair. That’s a lot of attention, and that’s what it takes. Most pet owners devote up to about 5% of their day to being with their pet. That’s a big difference, and it’s why big tropical birds flood bird rescue homes and shelters. They are way too much work.

In the wild, though, give me a flock of cockatoos any day. I’ll give them sticks to chew and take their picture.