The forecast was rain, putting museum visits at the top of the day’s activities. We have visited both the northern and southern extremities of Botany Bay and Sydney Harbor, so when I read that a painting of the view from the North Head was newly installed in the National Library of New South Wales, it became a must-see. We had visited the North Heads on a perfect day.

It was also a beautiful a day when Arthur Streeton painted the view in 1894.

Panoramic View of Sydney Harbour and the City Skyline, depicts the complex entrance to Sydney Harbor. Streeton is one of the best known of late 19th-early 20th century Australian painters. I found other views of the same vista by painters of the previous generation, equally lovely. 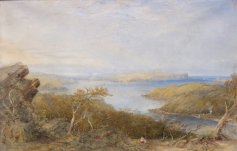 I get great pleasure from seeing a painting of a landscape I have visited. On the left is the North Heads by Eugene von Guerard in 1856, on the right by Conrad Martens in 1866. The landscape didn’t change much until the 20th century, yet each artist shows the bay in a slightly different way. Between the National Library and the Art Gallery of New South Wales, we had a tour of the history of Australian art 1850-1960.

There were other places we’ve seen that look different today than they did when painted. Fairy Bower is still a lively spot between Shelly and Manly beaches. 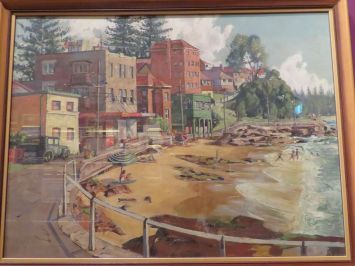 This is the Fairy Bower pool today (left) and when painted in 1956. 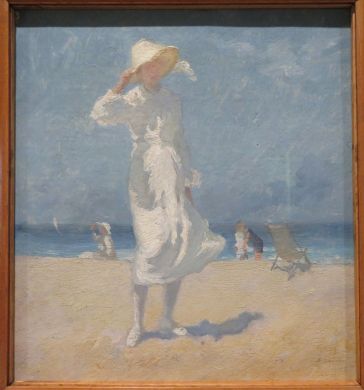 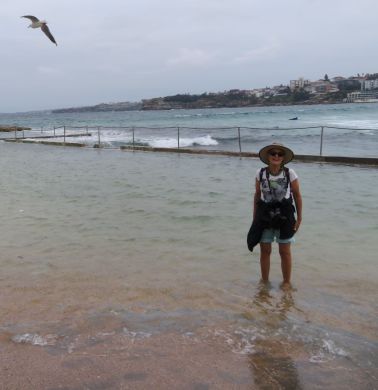 Romantic paintings of the beaches are often so much lovelier than the reality. Both the above are from Bondi Beach, and the ones below show beachcombing.

One last painting caught my eye because it depicts countryside that we have seen in the parts of rural Australia we’ve visited so far. Morning Light, by Elioth Gruner, painted in 1916. Few of the Australian artists are well known outside these borders, though their common themes of natural beauty and tranquility are universal. It makes me happy just to look at them.