The High-Noon Birding Society held a meeting as we looked toward the skies from lounge chairs on the upper deck of our cruise ship in the Galapagos.  We 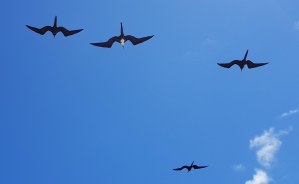 glanced upward and realized we were being shadowed by magnificent frigate birds. (That’s their official name “Magnificent Frigate birds”). Frigate birds float over the ocean and are incapable of diving into the water (their feathers aren’t waterproof), meaning they steal most of their food from other birds, or skim it off the surface.

They look like a cross between a bat and a bird skeleton, and show the close relation of birds and dinosaurs by resembling pterodactyls of the dinosaur era.

They attract females by inflating a pouch under their beaks and squawking pathetically. Go figure.

Our first excursion off the ship took us to N. Seymour Island to see nests of frigate birds. The chicks are very cute, the youngest looking like stuffed toys, the slightly older ones rather regal sitting on their pile of sticks. 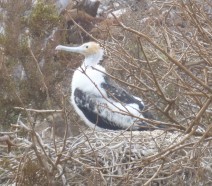 Here we met our first bloobies (blue footed boobies). Our guides had mentioned three species of birds and we discovered that Bloobies are blue-footed boobies, Roobies are red-footed boobies and Nazoobies are Nazca Boobies (in guide-speak). 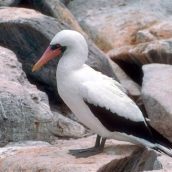 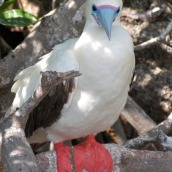 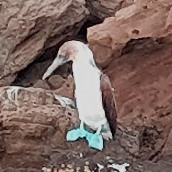 Later in the trip, we visited an area where all three species of booby nest in the same area. We have seen Nazoobis, or Nazca boobies, on the coast of Peru, but not the Roobies, Red-footed booby, a tropical species that likes islands. Weird fact, red footed booby feet bend, while the blue footed booby’s feet don’t. Reds nest in trees, blues on the ground. 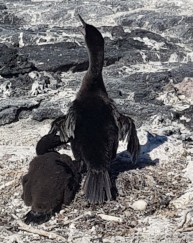 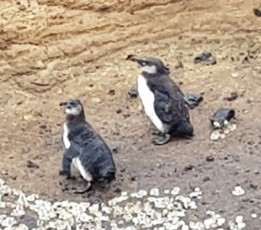 Other birds of note include the Galapagos Flightless Cormorant, such a good swimmer that its wings no longer have much purpose and are small and stunted. The other is everyone’s favorite Humboldt penguin, an unbelievably fast swimmer. In the Galapagos, their motto is “so many fish, so little time.” 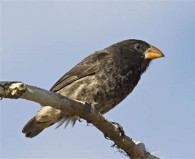 What surprised me was that on our tour there was very little discussion of Galapagos finches. These are Darwin’s finches, the ones that adapted from a single original species to the conditions on each island in ways that resulted in their beaks ranging from very thin and pointed (picking insects out of cracks) to very strong and wide (cracking large seeds). There’s even one nicknamed “the vampire finch” because it dive bombs the booby’s tail and sips a bit of blood from it. The speciation of finches is one of Darwin’s observations that led him to consider the question of how evolution occurs. They are very important historically and scientifically.

However. Finches are small and mostly dark colors. They are difficult to see even with binoculars and most people didn’t bring binocs. We realized that Darwin made his observations while sketching specimens that had been killed. Dead birds don’t fly away, and you can measure their beaks carefully. It was a different era, when collecting specimens was more acceptable than it is today.

I was searching for a bird that Amanda was pointing out…..and finally found it. 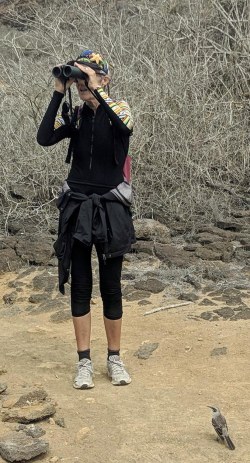 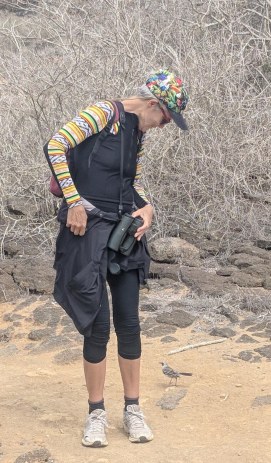 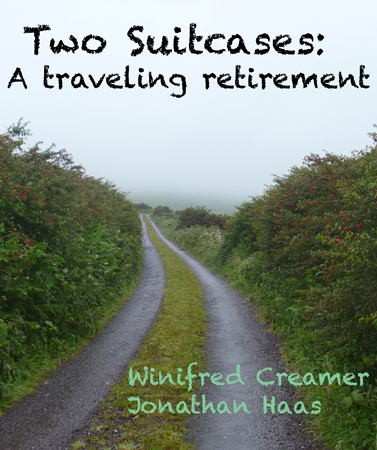