It was almost dawn, 5 am when we left the dock for an hour’s ride up the Tambopata River. Boatmen know their way around snags and shallow spots even in the dark. Our boat was long and narrow, the eight of us sitting on benches that faced each other, all of us leaning out to stare at the shore. They make no promises but many animals feed at dawn.

Before long we saw three capybara (like 50 pound guinea pigs) grazing on the riverbank, then a caiman and then two more. A large heron stood by the shore, and turtles perched on logs. Looking at the river more than 100 yds wide and still hundreds of miles from emptying into the Amazon, it is difficult to comprehend the immense size of the Amazon Basin.

We came to see a special part of the Amazon, short clay cliffs that attract macaws and parrots. Since I first saw a picture, I have wanted to visit. If you watch TV, you may have seen images of large bright-colored macaws perching on the clay as the narrator explains that the clay provides minerals and helps the birds digest the fruits and insects they eat, counteracting toxins that are found in some of these.

It is a dream come true to be riding along the river. As we ride along, I consider my desire to see this in person and my expectations. I am thrilled to have gotten here and I’m not as tired as I thought I might be at 5 am. I can’t wait to see the birds. I’m apprehensive, too. I don’t want to be disappointed and we’ve been told there are some mornings when the birds don’t come down to the clay or are scared away. We stop at a ranger checkpost where one boat is just pulling out and another is right behind us. Each boat carries 4-8 tourists. Our local guide runs up the steps cut into the steep clay bank. He reappears a minute later and we cast off, hurrying upriver. Finally we pull up onto a gravel bar where two boats have already put in. The clay lick is on the other side of the river. We’ve arrived.

The cliffs are not as high as they look on TV because cameramen use telephoto lenses, but with binoculars you can see all the birds very clearly as we’re barely 100 yards away.

There is a pattern to the way the birds visit the clay lick. Smaller birds come first. Flocks of as many as 100 blue headed parrots shimmer blue and green as they fly by.

As they turn and tilt upward the color changes to the red of the feathers under their wings. Smaller numbers of other species are there, too, and our group gets busy identifying dusky headed parrots, yellow crowned amazons, white eyed parakeets, orange cheeked parakeets. There are even a few blue headed macaws in among the blue headed parrots. The crowd of smaller parrots flies onto the clay and we watch them cling to the surface as they gnaw bits of clay and scuffle, keeping up a constant chatter. The audience is largely silent, pointing and muttering descriptions and species names, focusing their binoculars, spotting scopes, and cameras. Many visitors have 300-400 mm lenses to be able to capture the details of every bird. We are fortunate to be with them and see their spectacular images.

After an hour we’ve seen the small parrots flock on the clay. We’ve identified all the species present and we’ve seen the birds spooked by something and fly away in a mass of blue wingbeats. Slowly they return to the branches above the cliff and even more slowly a few fly onto the clay again and begin to nibble.

Meanwhile, the macaws sit high in the trees. They arrive in pairs, blue and gold, scarlet, red and green, and the smaller chestnut fronted macaws. After a while they come closer, moving in pairs. Eventually the scarlet macaws are sitting on the branches just over the clay, and then fly down to the clay surface and take over.

We see the process twice as we change sites. After the first hour our group returned to the boat for breakfast onboard though still in sight of the birds. We drank tea and coffee, ate rolls and butter, hard-boiled eggs and sipped juice boxes, then set off around the next bend to another spot where birds gather on the clay. The other boats moved as well and we all end up sitting on folding stools or standing quietly waiting for the birds. This time, a flock of scarlet macaws arrived two at a time to two trees above the clay. About 30 of these huge birds huddled together as they awaited some invisible signal. Little by little they began to fly onto the clay. Shutters snapped like it was a presidential news conference.

Compare my photo with Andy’s: Macaws on Clay Lick

Not all went as planned. We all expected the flock to descend to the clay but just as the first dozen birds began investigating the clay, a group of vultures coasted in over the trees, spooking the macaws.

In an explosion of red wings the macaws dispersed, circling down the channel and up into the trees. Slowly the flock re-formed in the trees over the clay, mostly scarlet macaws but also red and green and chestnut fronted macaws. By this time it was 10:30 am and we’d been watching the clay and the birds for more than four hours. It was time to go. We were all tired but not entirely happy to leave. This scene repeats itself every day and we were walking away after only one long look. We motored back downriver, stopping to look at other birds and the now-sleeping capybara. I’ve just realized one of the great dreams of my life and all I can think of is a second cup of coffee and a nap. 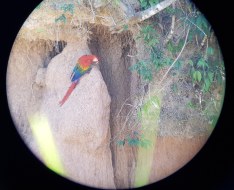 Still, I’ll have the picture of macaws on clay in my head forever.

6 thoughts on “When a Wish Comes True”