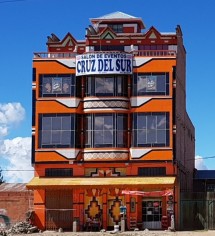 We couldn’t help but notice the houses built on top of apartment buildings near the airport in El Alto, on the plain above La Paz, Bolivia, since they are brightly colored and decorated like casinos. The more we found out, the more fascinated we became. These buildings are considered “Neo-andino” architecture by some, and are credited to a single architect, Freddy Mamani Silvestre. Mamani also paints and sculpts brightly colored works that we saw in several places in La Paz. 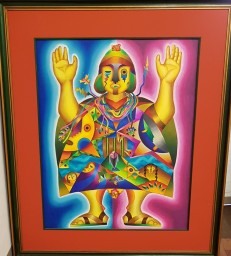 The buildings and bright colors are an expression of Aymara pride and economic power that has developed since Bolivia elected its first Aymara president, Evo Morales, in 2006. (He’s just been elected for a third term.) Mamani says he is inspired by Aymara folklore, colorful dance costumes, bright textiles, and archaeological symbols from both Tiwanaku and the Inca. His buildings have been criticized as kitschy and overly decorative, but he claims that his intention was to liven up the brick expanse of El Alto, where he grew up. El Alto began as an overflow suburb of La Paz populated mostly by indigenous people. Today, it is Bolivia’s second largest city. La Paz is located in a valley that is completed filled with houses up to the edge. El Alto is where housing spills over onto the altiplano where there is the potential to expand away from La Paz for miles.

Newly affluent Aymara families in El Alto have adopted Mamani’s style. The overall plan is for a family to create a business and living space. The ground floor has commercial spaces, while the second floor is an event space to use or rent for weddings, quinceaneras, and other events. Some of these are double-height ballrooms decorated like the inside of a pinball machine. Higher floors are offices or apartments for family, while the top floor is the “cholet” (from “Cholo chalet”), a house, often with a gabled roof, on top of the structure. Who lives in a “cholet”? A Cholo and a Cholita.

“Cholo” is one nickname for indigenous people. Sometimes people call themselves cholos, and in El Alto and La Paz, a “Cholita” is a woman of means who continues to wear traditional dress of many skirts, or pollera, an elegant shawl with very long fringe and a bowler hat that may be decorated with an elaborate metal ornament to match her shawl pin. You can tell a Cholita from a country woman by the fact that she usually carries a bag or briefcase and not the striped aguayo, the  square of cloth that Bolivians use to carry everything. She may be hailing a taxi rather than boarding a bus.

There are detailed photos of Mamani’s Neo-Andino houses in El Alto in this book:

The Architecture of Freddy Mamani

Bolivians with aguayos. In rural areas, men carry them, too. 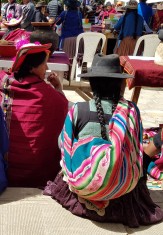