It’s often breezy at the beach. We got out of the car and crossed the fringe of dunes, arriving at the shore to see small waves crashing and the wind rushing east along the sand. Walking into the wind, we started our beach combing, finding smooth oval pebbles and beach glass. 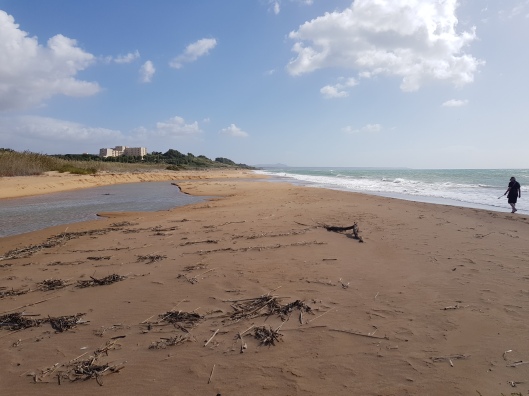 It wasn’t sand flies or hot feet, but the sand stinging our ankles, whipped along by stronger wind than we had felt before. I only remember the bite of the first gusts, though the wind kept up so strongly I almost lost my footing a couple of times. The sun was as bright as ever, and the water felt warmer than usual. We could feel the seasons changing.

The light is more slanting as fall comes on. Morning and evening shadows are long and last longer every day, as though the sun is resisting Apollo’s horses dragging it upward. One evening I said, “You didn’t need to close the shutters so early”… then realized that they were open and it was already dark. 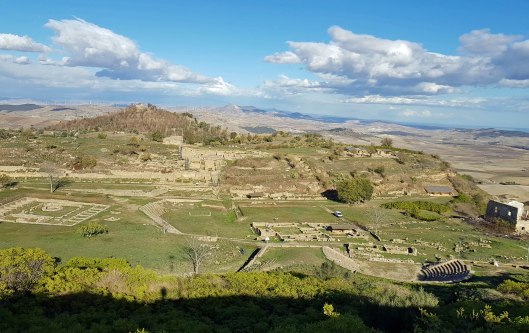 The wind was still blowing in the change of seasons at Morgantina the next day. I had to give up on wearing my hat or it would have flown miles away. Morgantina is another of the mammoth ancient sites in Sicily that had a long and varied history before being sacked by the Romans in 221 BC. Though it continued to be occupied, the city never regained prominence. It’s been a couple thousand years since then and Morgantina is still sitting on its hilltop out of the mainstream.

In the bath house 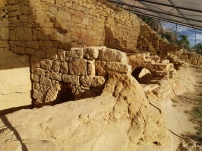 The wind blew away most of the visitors. We saw a busload of students from a distance and after they disappeared we saw only one or two other visitors at this vast site. (It is 30 minutes each way from the Palermo-Catania highway, and not close to either Catania or Palermo, a bit out of the way.)

The fall scenery is spectacular, silver-brown furrows in the recently plowed fields that curve and dip across the rounded landscape.

Mt. Etna sits in the far distance, volcanic ash like snow on the upper slopes and clouds covering the peak. The wind blew clouds overhead, creating patches of light and dark that changed constantly, shifting a hill into sunlight then into shadow as we watched. It was a captivating landscape, half New Mexico’s stony ridges, half midwestern farmland, and definitely its own thing. 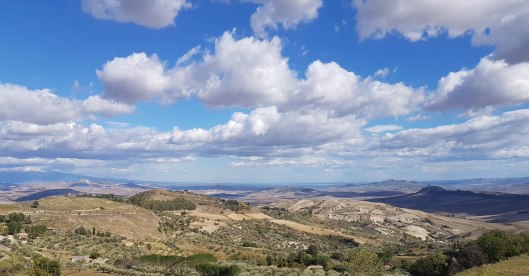