We spent our last night in southern Italy at the Grand Hotel Vesuvio with a sea view room. Our hallway was lined with old prints of Mt. Vesuvius. Buildings facing the waterfront where the Vesuvio is located are all in good repair, recently painted, and punctuated by good restaurants.

In the afternoon we took a cab to Piazzale del Nilo to see what the Nile looks like as a statue (reclining old man holding a cornucopia leaning on a sphinx), and then went on to the street of the presepi, ceramic figurines and wooden villages that create scenes of the manger in Bethlehem accompanied by women, children, woodworkers, fishmongers, bakers, angels, animals, wise men and the holy family. 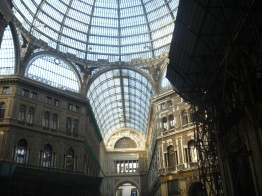 Later, we walked along the lungomare boardwalk to the Galleria Umberto I, a cross-shaped shopping arcade topped by a high arched glass roof. We stopped for a drink and then strolled back along the shore watching the many boats on the water, from sailfish to ferries. A delicious dinner and we retired to get ready for our flight to Palermo.

The morning buffet included traditional Neapolitan pastries, among the best I’ve tasted. Out the window of the breakfast room the bright sun glittered on the sea. We saw a four man scull starting practice on the Bay of Naples, where they could row for miles. 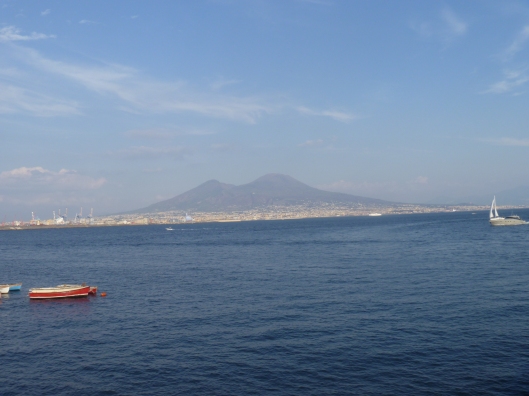 As we stepped to the taxi the entire Bay of Naples stretched out in front of us, sun shining, a few tiny clouds hovering over Mt. Vesuvius. It was impressive and gorgeous. Our cabbie said he like to work from 6-11 am on Sundays while everyone was still asleep and the streets of Naples were peaceful, just a few walkers and cyclists on the lungomare. “That’s when you find Salvatore,” he finished, thumping his chest. He then roared us through the heart of the city to the airport, bobbing and weaving like every other driver, waving at two cars and shouting at one. Exhilarating, terrifying and scenic, we careened past a house with a dark wood balcony, now shabby but with old stained glass panels pale purple, white, and yellow. I wanted a photo, but we were already past. There were tall buildings with elegant balconies. A block farther on were  tall peeling, water-stained apartment buildings with laundry hanging over the windows of the neighbors on the floor below. Three old umbrella pines bordered a vacant lot. Palm trees slouched between tall buildings. Some streets were reminiscent of scenes from “My Brilliant Friend”, but we did not stop. Salvatore was gunning for the airport, the finale of our Naples visit. 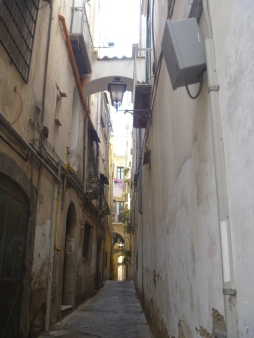 Three days earlier we had a different kind of visit. Rather than a deluxe vacation visit to Naples, I had a doctor’s appointment. I’d made the appointment almost a month earlier when we were newly arrived in the area and I knew I needed a follow up eye scan. I called the day before to confirm that I was still on the books, then we made plans to take the train to Naples from our house in Salerno and walk to the doctor’s office on Via Umberto I. All went according to plan, we left home at 1:30 pm. We waited a few minutes for a local metro to the main train station, about a six minute ride. Then another 20 minutes waiting for the Naples train. The ride was uneventful and we arrived in Naples Centrale to the usual chaos of a major rail depot. The medical office was on Corso Umberto I, a straight shot down a busy street. It was a bit difficult to find the doctor’s office–it proved to be adjacent to an old palazzo under renovation wrapped in scaffolding and construction netting. The doctor’s building had a dim interior and no indication of what floor the office was on (third). I kept walking up the stairs until I saw the sign “Pascotto chirugia y ottica”, and the door was open on a bright waiting room. The young women inside were helpful and spoke some English. My appointment went smoothly and very rapidly. In the US, my eye appointments rarely take less than two hours. In Naples, I spent more time waiting for my receipt to be printed than anything else. I found that I needed an injection and since in Europe these are not done in doctors’ offices, I had to make an appointment for the next day at a day surgery center in a completely different part of Naples.

We trudged back to the train station through the noise and bustle of rush hour, not tempted to stop in a cafe. Another 20 minute wait, then the train to Salerno, another wait and the metro to Pastena, and we were home by 7 pm. The impression I got of Naples by going in and out on the train, then walking from the central station was utterly different than my impression from the lungomare in front of the hotel. From Corso Umberto I, Naples is like any other big city, crowded, under construction, full of litter and people rushing from place to place talking on their phones. It seemed unexceptional. The workaday city was not nearly as glamorous as the Naples of the waterfront though it was interesting to see both. My experience shows you the difference between being on vacation and not. I couldn’t put off my doctor visit until I get home. It is no more entertaining to do necessary tasks in a lovely place than it is to do them “at home.”

2 thoughts on “Two views of Naples”