Ferragosto is the annual down time for all of Italy. During the two weeks from mid-August until the first of September almost everyone takes a holiday, and every desirable hostelry in the country is jammed to the doors. That’s why we left for Ireland. We returned to Italy when order was restored on Sept. 1. Our first trips were to the beach and a major archaeological site, Paestum.

At the beach, the shift was dramatic. There were only two or three umbrellas in use at beachfront businesses with 40-60 umbrellas. Staff members were hosing off equipment, taking down cabanas and stacking the parts for storage. We had a lovely afternoon enjoying the sun and the breeze. No babes in bikinis, just other retirees and a few families with preschoolers.

The next day we tackled a real challenge, Paestum. This huge archaeological site was home to Greeks, Lucanians (ancient Italians), Romans, Lombards, pretty much everyone who passed through. The Greek temples are the best preserved portion of the site,

though the museum holds the remains of painted tombs and artifacts from later periods. We chatted briefly with one of the archaeologists working at Paestum this year and we watched a staff member running ground penetrating radar across a section of grassy field that is probably full of ancient houses.

There is also a very large amphitheater and other round buildings that were used for meetings of different sized groups. 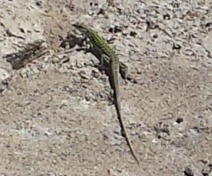 There were not many visitors, and since Paestum is so large, we passed very few people as we walked around. There may have been more lizards than tourists. We could tell that the high season is over. One tour bus was parked in the lot beside a scattering of cars.  Everyone else was back at work.