The weather was highly variable on Orkney, rain and wind alternating with sun. Every few minutes we ran for the car to hide from the rain and then hoisted ourselves out again when it passed. We saw rainbows constantly, after every storm. During our full day there, we saw about a dozen different rainbows, partial, whole, even a couple of double rainbows. What a place! The rainbows are one of our strongest memories of the trip. 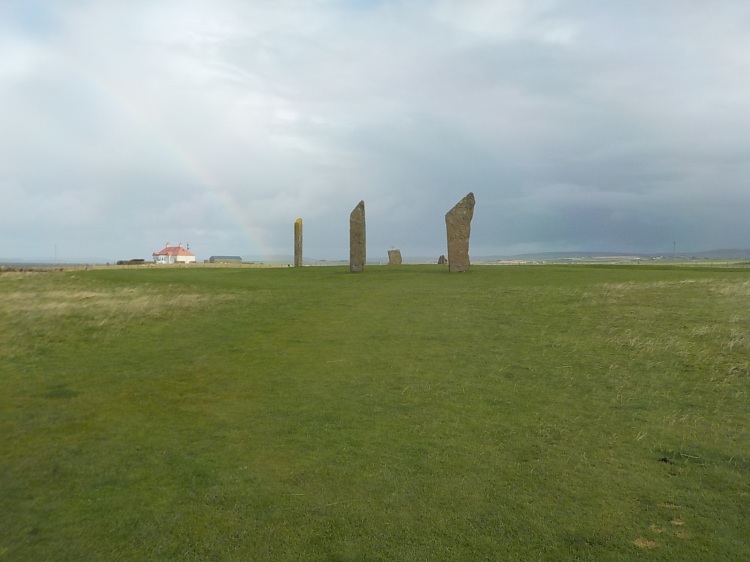 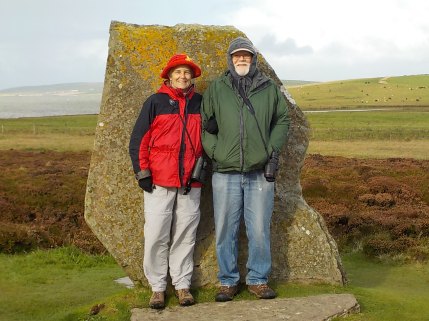 I wore one short sleeve and two long sleeve shirts, a hoodie, fleece vest, canvas jacket and my raincoat. I wore rain pants over my jeans. I was glad I had my gloves, wool socks and hiking shoes. 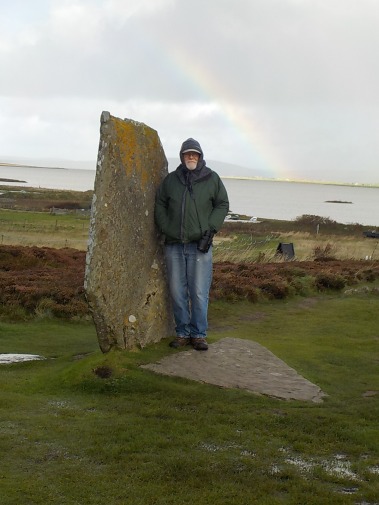 Archaeology was at the top of our sightseeing list, starting with the Stones of Stenness. The remnant of this ring of stones lies at one end of a natural causeway between two lochs (in this case, fresh water lakes) in the center of the Orkney mainland.

Note the rainbow above Jonathan.

It was very cold and rained off and on all day.

Not all the stones are still standing–in the early 1800s, a local farmer was stopped from knocking them all down and breaking them up. All the visitors got in the way of his farming. 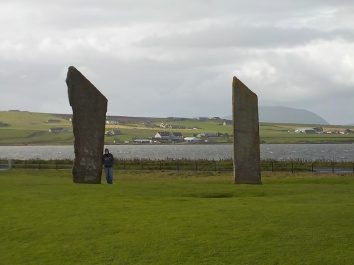 Some of the stones are over 20 ft. tall. That small figure by the stone is Jonathan.

Most remarkable about Orkney is the age of these stone circles and villages. Most are 5000 years old, built and used between 3000-2000 BC.

The Stones of Stenness were not the end of the story.

Just down the isthmus that separates these two lochs is the Ring of Brodgar, an even bigger circle of upright stones. It really is the biggest stone circle I’ve ever seen. 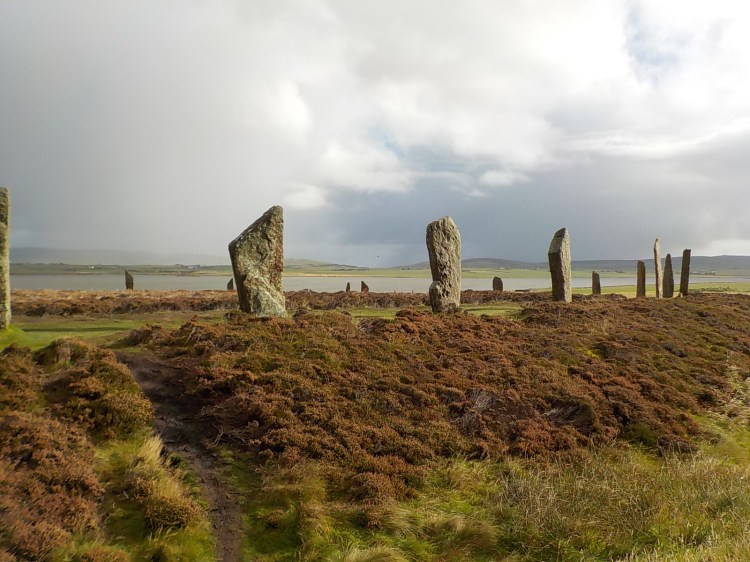 It started to rain, so we stood in the lee of a tall stone until it passed. 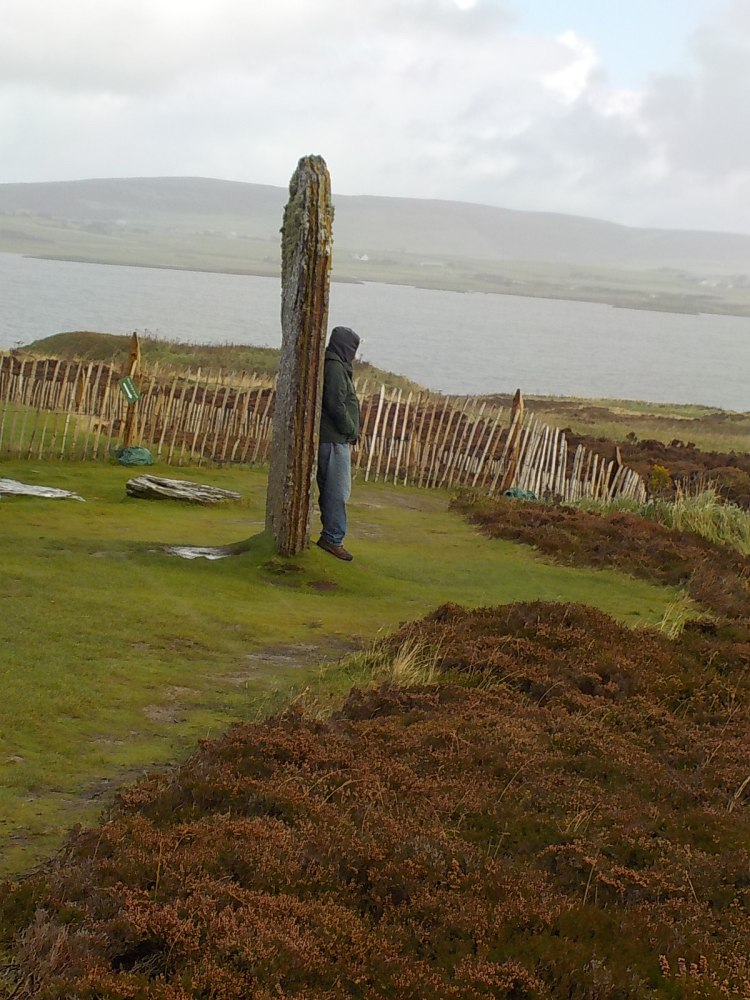 Though the stone circles have been known for centuries, the ancient village that lies right between the two circles was not discovered until 2002. New techniques of geophysical survey allowed archaeologists to see that the ground below the surface was disturbed probably. by human settlement. Excavations go on each summer. There is a detailed view of the houses that been excavated and a dig diary on the Brodgar Ness website (click on the words below this photo from their website): 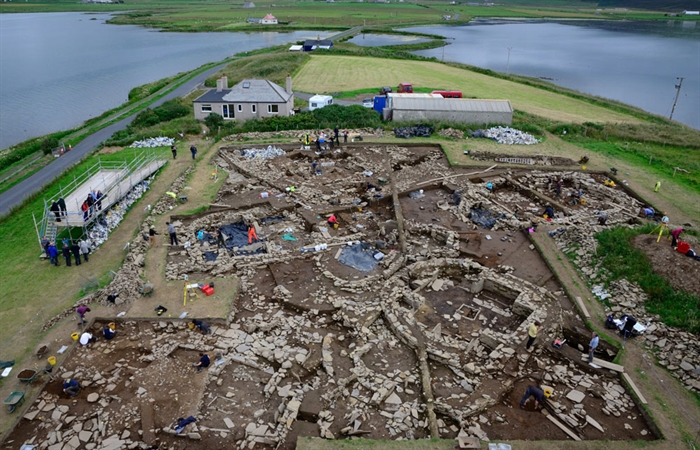 Because dig season was over, the site was not available to visit, and is covered with tarp and old tires to protect it….so we went to visit the site of Skara Brae that is open for visitors. It is a beautifully presented Neolithic site, helped along by the fact that household furnishings were built of stone and left behind. 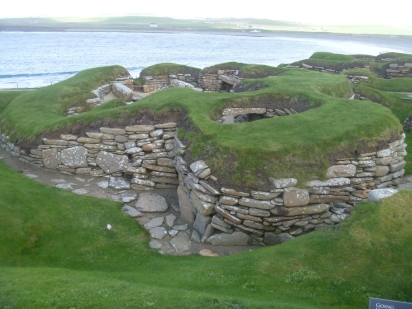 These houses were like hobbit homes, partially underground, with roofed passageways among the structures, so that people did not have to go outdoors to get to their neighbors. 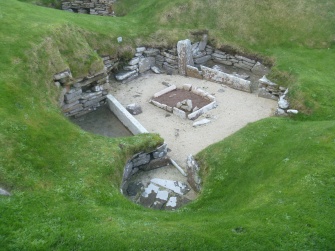 The older homes have sleeping areas and storage spaces built into the hillside. (It was made of midden, er, garbage, and might have smelled just a bit. Maybe it was weathered and only smelled like the shore.) 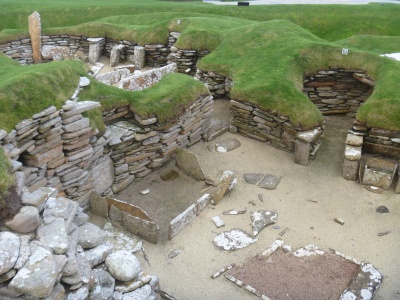 The later houses were larger, with areas for sleeping and storage marked off with stone slabs. You can see there was a large hearth at the center of the house. It was probably smoky, but warm. 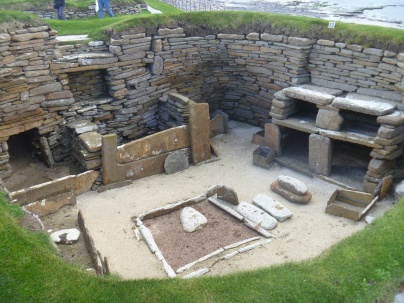 The houses each have a “dresser” or set of shelves built across from the main door (on the right in this photo). It’s suggested these were used to store and display household goods.

The visitor center shows some of the objects found at the site, and others are at the National Museum of Scotland in Edinburgh. It’s a very detailed stabilization project, based on excavation was carried out in 1928-1930 by V. Gordon Childe, a highly regarded British archaeologist.

Having met our goal for archaeology, we went to the beach in Birsay to look at birds and picnic looking at the water while it rained and then didn’t rain. The view is stunning, and it’s possible to walk out onto the point at low tide. That will have to be for another trip, and it ought to be in a warmer month.

We saw flocks of migrating curlews and lapwings, hundreds in a single flock when we usually see one or two. We made our way back to Kirkwall for a bit of shopping and then on to the hotel and dinner. The next morning we stopped at The Gloup (!) for some birdwatching on the way to the ferry back to the rest of Scotland. 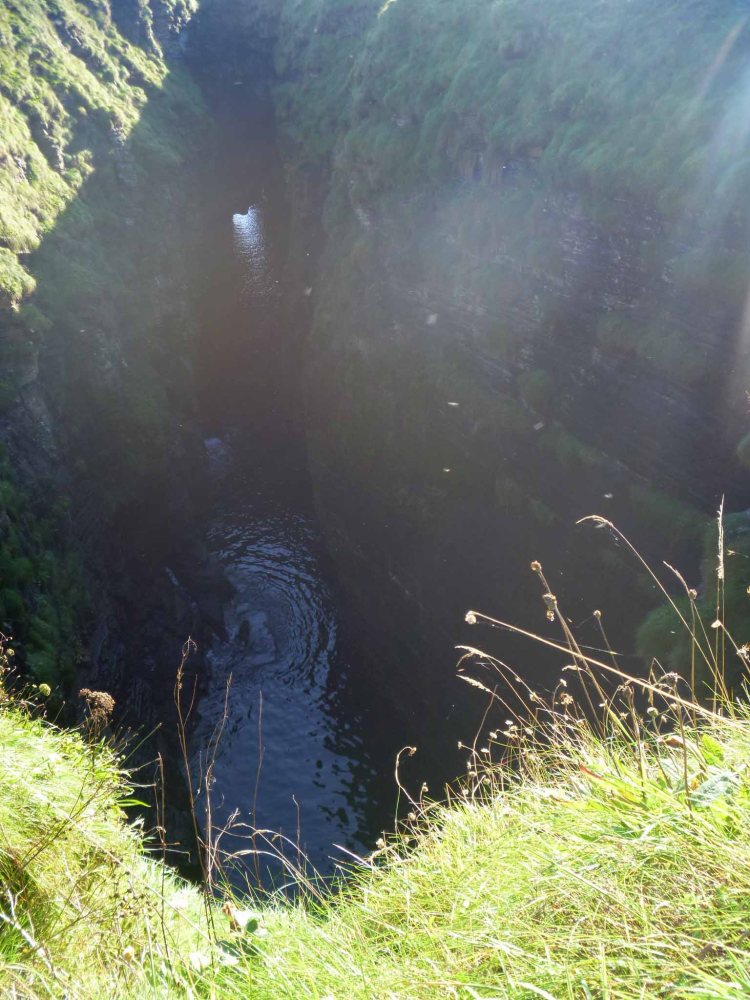 Gloup is a Scottish term for a collapsed blowhole and comes from the Norwegian word for a ravine, so its all very sensible–it just sounds silly. I was sorry to have such a short visit on Orkney. I could have spent a week walking along the cliffs and beaches. The day we left was perfect weather, sunny and mild. We rode on the outdoor deck of the ferry all the way back to Gills.