We had a whirlwind week, splashing through the rain and ducking into cafes to avoid the worst of the downpours as we visited a variety of places with our visitor, Peggy. In Lisbon, we began at the “Taste of Perdition” and Thieves Markets, both of which might have been better without rain. Despite the unprepossesing start, we did buy cheese and meat, and drink coffee while we dried off. Peggy and Jonathan each found a treasure in stalls that weren’t washed out.

On our other days in Lisbon we visited the National Tile Museum (Museu Nacional do Azulejo), the Castelo  São Jorge (St. George), the museum of Portuguese decorative arts of Ricardo do Espirito Santo Silva (FRESS), and the Tower of Belém along with the Discovery Monument and the Monastery of Saint Jeronimo (Hieronymus, Jerome, all the same name). The Church of Santa Maria in the monastery complex was a highlight, as it contains the tomb of Vasco de Gama, the great explorer.

Many sights incorporate churches and chapels. The National Museum of Tile is the Madre de Deus convent. The archaeology museum, marine museum and planetarium are all part of the St. Jerome monastery complex, and other museums are adjacent to or within old churches, monasteries, fortresses, castles, or mansions–of which Portugal has many. They can start to merge together–which monastery, church, museum?

The Museu Nacional do Azulejo was a highlight, so much tile, so little time! Early on, Portuguese tile makers learned to imitate Arab mosaics with painted and incised tile. The lower right is a mosaic of a hundred or more tiles (Fez, Morocco), a similar pattern on the upper right consists of 18 tiles (Lisbon, Portugal). 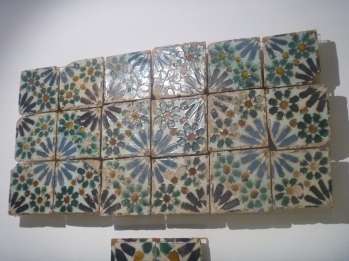 This is Portuguese tile made to look like a mosaic.

This is a Moroccan mosaic.

The setting was also spectacular, a gilded convent, suggesting that things weren’t bad for all cloistered nuns, you just had to get into a cloister that had a royal patron.

The Castelo Sao Jorge gave us a chance to look at the view over the city. We had lots of excellent parking karma during the week, too, and were able to park about 100 yards below the castle entrance. (Lisbon is definitely short on parking–they could use quite a few 10 story parking structures, but parking is possible.)

View from the parapet. 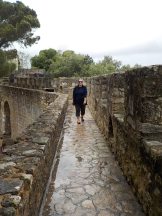 The rain let up long enough for us to have a great view over the city from the ramparts of the castle and to look at the archaeological excavation of an Iron Age settlement that predates the rest of the area. Later, the sun appeared briefly, and we took a stroll around the neighborhood and ate our picnic: 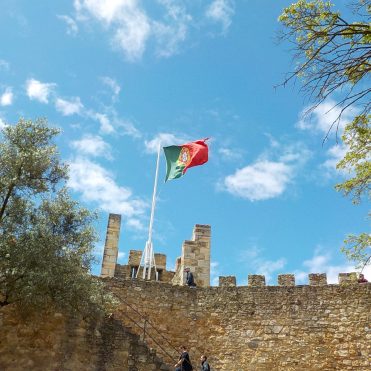 The sun shone, the wind blew, and the flag waved.

Every castle needs a peacock–except when they cry like a dying cow.

The street performers came out with the sun.

Sometimes a park bench is a picnic spot.

Peggy found this sculpture around a corner.

When the rain returned, we ducked into the Museu Artes Decorativas Portuguesas–Fundacao Ricardo do Espirito Santo Silva (FRESS). Sr. Silva collected a lot of things and though there’s not much narrative about why he selected these objects, some are lovely, and nearly all are by Portuguese artists.

By late afternoon, we were leaking historical facts like stuffing from an old sofa cushion, so we headed for home.

We weren’t done with Lisbon, because we’d decided to see the Torre de Belem, an old fortress on the waterfront. We parked at the Mosteiro dos Jeronimos, a gigantic complex complete with church (Vasco’s tomb). Though many structures are noted as pinnacles of the “Manueline style”, highly ornate carved stone that became popular in Portugal during the reign of Manuel I when, as far as I can see, money was no object…to anything. Here is the door at the monastery, one of the many considered to be the apotheosis of Manueline style. It’s easy to recognize because it has to have everything, arches, multiple columns, twisted, of course, and statues.

Though much smaller, the Torre de Belem is equally ornate, crouched by the river with lots of cannons ready to defend Lisbon. The tower was paired with another on the opposite bank of the river at Sao Sebastiao, to defend Lisbon. This worked more or less well during a long and complicated history, but the tower has survived to the present. Long lines of visitors wait to come through the doors, descend to hit their head on the arches of the dungeon, and then climb to the upper floor for a view over the water. The sun broke out in the late afternoon in honor of our visit, making it beautiful.

In honor of the sun, we took a three-person selfie.