Rabat is Morocco’s capital. It has strong competition from Casablanca for economic prominence and with Marrakesh for cultural prominence. I’d like to see the capital with museums that reflect the best of all periods of Moroccan history, but Rabat seems to have thrown in the towel on the museum front.  I already mentioned my fruitless search for the traditional jewelry from the palace collection. (These pieces are from an exhibit in Marrakesh in 2014.) The traditional jewelry is extravagant and beautiful. 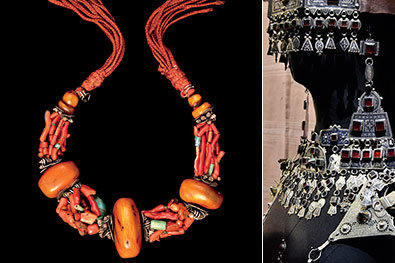 Next up was the archaeology museum in Rabat to see the Roman era bronzes recovered from the site of Volubilis, an ancient Roman city near Meknes. Anyone planning to visit the site tries to see the bronzes in the museum. No luck for us. The main gallery of material was closed, with only a few small items on view along with a reconstructed mosaic floor. Objects had been removed with only a “not on display” tag in their place. There was little information about objects apart from the name of the site. It was depressing.

Not all museums have been abandoned in the capital, however. The Mohammed VI Foundation supports the new Museum of Contemporary Art in Rabat. It is a large building with extensive exhibits of art by Moroccan artists. Too bad some support couldn’t be shared with other museums.

This piece is at the contemporary art museum in Rabat. The tiled surface seems to refers to the traditional zellij tile work found in all historic Moroccan structures. Too bad museums where examples of traditional zellij might be seen are all closed. (There are museums in other cities in Morocco, just not in the capital.)

We went on to the ruins of Chellah, an ancient Roman city within what is now Rabat. There may have been earlier occupation by Carthaginians and Phoenicians, but the Roman settlement is what can be seen today. Here’s the Roman era:

The long occupation here is indicated by the reuse of older dirt full of pottery fragments by people making mud walls at a later time.

The ruins are maintained in a garden setting, and are home to a colony of storks. This is probably not good for conservation of the site, but it enhanced our visit.

I am pretty sure that Dr. Seuss has been here.

Chellah was used as a necropolis (burial area) during a much later period (Merinid) and the storks are as partial to the mosque for nesting as they are to other locations. There was a lot of clacking of beaks going on as male storks competed for attention.

The Merenid ruins revealed a interesting sights, including a piece of zellij similar to one we saw in the archaeological museum, and a man feeding the cats that are everywhere.

There wasn’t a lot of information about the site or any archaeological research that has been done here. There are men willing to provide guide service that have to be eluded or turned away at the entrance. I do not believe they have any information about the site either, other than the dates of construction of the Roman and Merenid structures. There are a couple of signs if you read French or Arabic. They, too, focus on dates. Overall, the scene for ancient culture in Rabat is pretty limited. It’s a view that has endured from the 19th century that people benefit from being in association with ancient ruins, an osmosis-preferably-with-a-picnic as a way to absorb an appreciation of monumental works from the past. My impression is that Morocco has too many unoccupied palaces and too few well-endowed museums.