An initial look at Morocco shows some similarities with Peru. There are low buildings of adobe, lots of craft items, a long coastline, surfing, parasailing, and high mountains. There is only a limited amount of rain and some creative terracing has been developed over the centuries to foster agriculture. 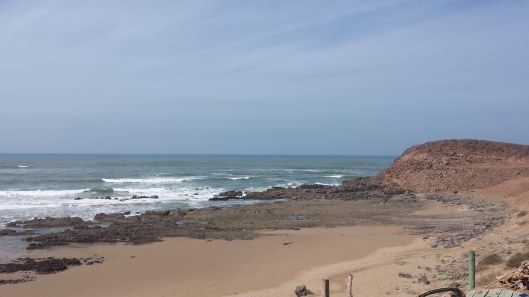 Despite the visible similarities, the two countries are different. Morocco is 1/3 the size of Peru and has a larger population by 5-6 million. As a result, the population density of Morocco (74 persons per sq km) is three times greater than that of Peru (24 persons per sq km). Morocco’s population density is deceptive, as much of the south is lightly populated, meaning that the population is dense, more than 100/sq km throughout the northern part of the country bounded by Casablanca–Marrakech–Fez–Tangier. This northern region is the heart of Moroccan tourism, more than 10 million visitors per year, much greater than Peru’s 4 million visitors (85% visit Machu Picchu).

The Human Development Index, a composite of life expectancy, education, and per capita income is .628 for Morocco and .734 for Peru (2014). Life expectancy at birth is 74 years in both countries, but average income in Morocco is just under half that of Peru ($12,000). The potential for education and income is greater in Peru than Morocco. 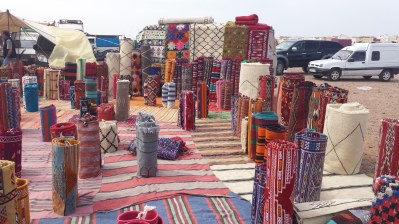 Except sometimes the souk in Morocco looks very different.

What can we conclude from these few statistics and my observation of Morocco for only a week? Educational opportunities are limited by tradition to some extent, and jobs for people of working age are not sufficient for the size of the working class in both countries, though the problem is more acute in Morocco. People of both nations leave for employment in other countries. This can lead to successful careers elsewhere, or a lifetime of scraping by in a more developed country in order to send money home. The extended family can be a source of contacts and assistance, but it can also be a terrible drain on the income a person does manage to generate. Peru remittances for the 4th quarter of 2015 were 715.81 million dollars, while Morocco’s were apparently 6 billion dollars for the year (aprox 1.5 billion per quarter). Thus remittances are one of Morocco’s important sources of foreign exchange.

An important difference in the Human Development Index may be most visible in the number of Moroccan women who go about veiled. I personally see this as a barrier to education and work. In southern Morocco, where we are now, many women wrap themselves in a 3 meter long swath of fabric, a melfa, to go out. These can be very attractive, but the need to be veiled is something I view as a problem. Foreign women do not alter their mode of dress, and men can wear anything from jeans to a floor-length caftan. Note the men and boys in the background of these photos. 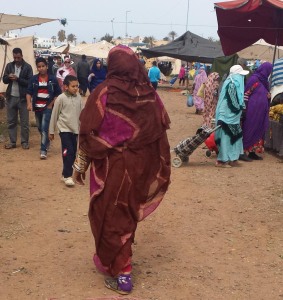 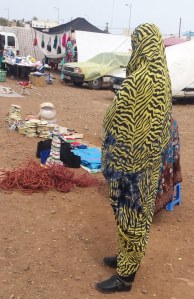 I am not sure what women think of their lesser role, and I know that many appreciate opportunities that arise for them. (See my next post on the argan oil cooperative in Mesti.)

An FYI: Many people do not wish to be photographed, and Joyce gave me good advice to always ask people before taking a photo. Some people agree to have a picture taken, others not. Thus, I do not have a photo of the beautiful tent full of vegetables presided over by a turbaned man in the Sunday souk. I have a picture of the camel’s head from the camel butcher, but not the crossed hooves from the beef butcher.