We were invited to a birthday party. Come to lunch! It sounds so simple, but you have to understand what it means (it’s a lot more fun if you know what you are agreeing to). Our friends Alex and Leila live in a beautiful setting, with a lovely house, patio, and yard that benefit from Leila’s love of painting, both large and small scale (note the blue walls of the patio). Alex works for his uncle, managing a large farm/ranch operation. We went to lunch to celebrate Leila’s birthday.
People are invited for 1 pm, and start trickling in then. We were not the first to arrive (we’re learning). The first two or three hours are for socializing, drinks, snacks and conversation. (If you think you have plans for later, you can ask that your drink be ‘suavecito’. You’ll probably abandon those plans, however.) We all wandered around the beautiful patio and the yard. Some people still had to shower and change, pick up young people and return. At one point, I think Alex went for a swim. All very casual (I was overdressed, as usual. I seem to go over or under, and haven’t quite absorbed the dress code yet.) We went through a stage of taking photos–of everyone with everyone.

We admired the lamb roasting in the style of “Chancho al palo.” It was slowly grilled over an open fire held up by stakes of rebar (the palos, or sticks).
There were lots of animals. Jonathan and I both like the tiny yorkie, Tommasa, though there’s also a cat, several dogs that go with the property wander in and out. One had new puppies and we put our names in for one when they are old enough–they were only a week old. The new puppy will be company for Rufo, our mostly blue tick hound. He’s still young enough to want a friend. There was also Alexa’s horse. Alex put him through his paces for us.

Lunch was served around 4:30 pm. It was delicious.

I even helped a little bit. It was totally farm to table. The lamb, potatoes and beans were all from the farm. Everything was delicious.  After lunch–it’s about 5:30 pm and everyone has been drinking beer and Chilcano’s since early afternoon (Chilcano: Pisco, ginger ale, a slice of lime). Now there’s dancing. 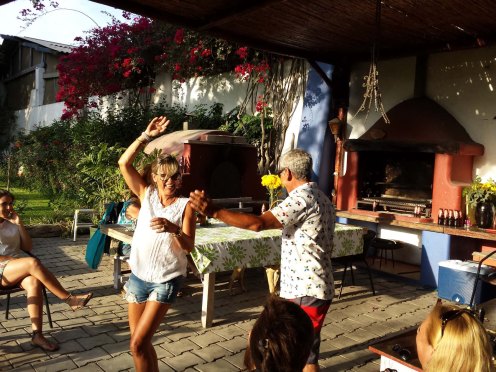 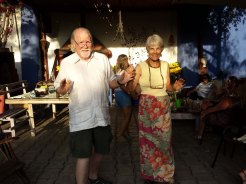 However, we all know that there is a very large torta (birthday cake) made by Dona Berta, one of the guests, so there is no leaving the party until the cake comes out. The birthday girl says something about going until midnight. There is not a loud chorus of support. Skinny-dipping in the pool meets with similar lack of enthusiasm. Conversation continues. Women argue over who is allowed to clear dishes. Men sip their drinks without comment. The big moment arrives and the torta comes out. We sing Happy Birthday, first in English and then in Spanish with much pounding of the table. It’s fun. The cake is delicious.

After cake, we all wound down. It’s been a great event, and we’re all caught up on the goings on of all our friends and neighbors. Everyone kisses everyone on the cheek and we leave for home.

And that….. is a birthday party.

There was no need for dinner. Jonathan gave up and went to bed at 8:30.